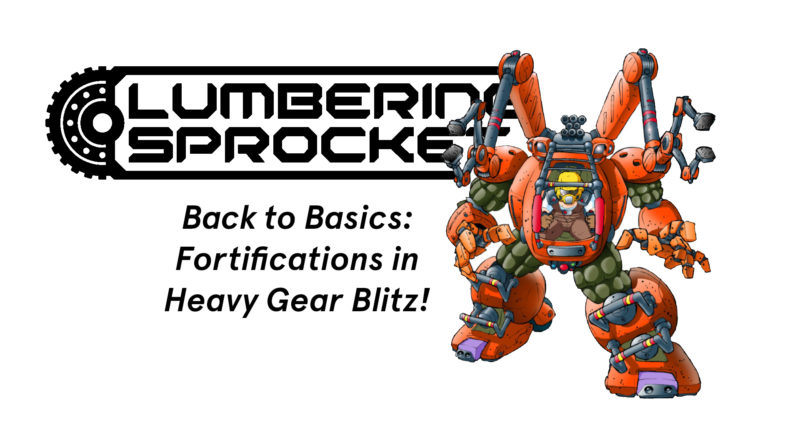 Heavy Gear Blitz works to include a combined arms feel to it’s game, and also remind players how big the gears are with the inclusion of human scaled models. Fortifications are another way of accomplishing both of these goals. Ever wanted to represent your force’s home base? How about ensuring your infantry have a hole to hide in? Fortifications are the way.

Fortifications are different from vehicles and follow the building rules. We will cover infantry in fortifications below since they are a special case.

Some fortifications, like turret weapons or coms towers, have actions and can take actions and reactions as normal. Others like trenches and windmills are just there to block line of sight or serve as cover for infantry.

Infantry gain several advantages from fortifications with the occupancy trait.

Some fortifications, such as trenches, simply act as area terrain for infantry, meaning you can be sure they will be safe wherever you deploy.

There are two main reasons to bring fortifications. For those without actions, its a chance to be assured you will have hard to remove cover wherever you need it. Because they can be within 6” of your DZ and hold markers can be within 12” this can be a way to keep models close to the marker in relative safety till the last turn of the game. If you want to have your infantry stay around a while putting them in bunker or trench will make them a pain to remove.

The other main reason is to bring the fortifications is armor ten models with guns.

The turrets and outpost are not that cheap, but also heavier than most tanks. An opponent will have to spend several actions to remove them, and the fortifications are not a terrible shot to boot. A few can provide some overlooked utility as well, such as the coms tower which can forward observe, or the homesteads which bring along the supply trait and a HMG in addition to sheltering infantry. Should you go the extra mile and bring the outpost, you get a bunch of autocannons and 4 actions for shots or focuses. Not too shabby.

As with most things in Heavy Gear Blitz, fortifications will depend a lot on your play style. But they offer a unique way to round out your force, represent a themed army, or unlock some hidden potential on the battlefield.