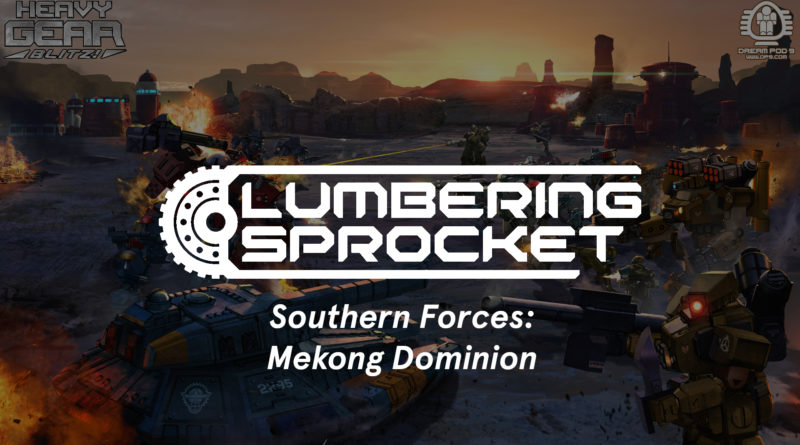 Embrace the way of the Samurai (and the gear police…)

The Mekong Dominion in the Story of Heavy Gear

A corporate dominated collection of citystates in a lush jungle region, the Mekong Dominion is one of the more independent regions of the Southern Republic. Powerful corporate families form clan like structures with their own police and mercenaries. Threats tend to be dealt with indirectly with clandestine actions or third parties doing the dirty work. The Dominion is heavily industrialized and sells far and wide across the globe while keeping its citizens in relatively brutal working conditions. Due to those conditions, the Mekongese military and police forces have extensive experience with MP gears used in breaking up riots and strikes. They bring this expertise to the front lines in the form of bonuses for MP gears and shields. The Mekong Dominion is the site of the oldest settlements on Terra Nova and celebrates its heritage. It speaks Mandanese, a separate language from the French of the Southern Republic, and maintains other east asian cultural traditions such as the vibro-katana for it’s heavy gears.

While it has access to AST Millitia units, local Taipans instead see to it that their own private armies, police forces, and mercenaries deal with many security matters. Leadership tends to be highly trained and only takes the field when they can do direct harm to high value targets. Much more widely deployed are police like units who deal with the often lightly armed threats the Dominion faces. Being a jungle heavy area, it’s hard for tanks to get much use. The tight confines and personal honor also mean that Mekongese pilots are often highly skilled in close quarters combat, and use their katanas with deadly efficiency. Like the ESE the Dominion also fields gears from other factions, but does so as mercenaries rather than representing foreign purchases. Corporations have access to obscene amounts of money and a few military contractors is sometimes the easiest way to use to make problems disappear.

Mekongese Excellence: All models in the force leader’s combat group must purchase the Vet trait if they do not already have it. This does not count against the veteran limits.

This rule means you will be fielding an expensive combat group no matter what you bring, so it’s worth considering what units will get the most out of the rerolls. The bonus skill points can mean a 2IC or XO is in order here since it will open up more orders. Fire support gears, while already expensive, sometimes benefit from the veteran re-roll and sharp shooter or trick shot upgrades can let you bring some deadly effective gunners. Of course, you could go full samurai mode and bring a command squad of all MP gears equipping them with Samurai Spirit AND Police State for a command squad that can tear it up in melee. While that will get very expensive, it will also be a demon if it gets close.

Remember that Vet gears will fulfill the veteran requirement here and do so often at a small savings.

Samurai Spirit: Commanders and veterans, with the Hands trait, can purchase the vibro katanas upgrade for 1 TV. If a model takes this upgrade it will also receive the Brawl:1 trait or increase its Brawl:X trait by one. A vibro katana is a LVB (React,Precise).

Vibro Katanas are not too much different from your existing vibro blade, but Precise increases their odds of a hit quite a bit. The added brawl dice means that you are essentially getting Precise for free as well. Be sure to note that veterans can also sub out the vibro katana for a spike gun and get much higher AP (which those bonus dice will also like). While it might seem largely just for theme, having a model with precise and extra dice can be a good way to deal with light armored fast moving enemies, like recon gears or bikes trying to break the line. It can be a good investment for a unit that is otherwise planning to hang back, just in case someone gets too close.

So by now you are likely thinking about your MP command squad of samurai and I’m here to say, yes it is good. However, don’t forget about using this rule to instead make a low cost and highly survivable squad. With Shield+, Smoke, and ECM Defense, models can be dodging at 5d6 and a reroll in the open. This can be a good way to get panzerfausts or grenades delivered right to the enemy front for cheaper than a group of samurai.

Mercenary Contract: One combat group can be made with models from North, South, Peace River, and NuCoal (may include a mix) that have an AR of 8 or lower.

There are simply too many options to fully discuss here. This can be a chance to use other models from your collection, make a very characterful squad from some of your favorite models, or try and fix holes in your build. Remember that this squad can be a mix, so you can bring a bunch of Southern fire support gears and a Cheetah to target designate for them, or haul along a Black Wind to join your Cameleon Recon group.

Weirdly, there is no requirement that this squad be counted as an ally, so your commander’s unit could be a hodgepodge of different gear manufacturers, allowing you to unlock the full potential of mixing and matching gears (just remember they must be armor 8 or lower).

Astute players are probably already thinking about using shield models from other factions and unfortunately, this doesn’t mean any model with a shield. The Model has to have “MP” in their name. With the armor limit this means northern MP models are the only real option. Most of the Northern models are nearly direct equivalents, but you could choose to use your mercenaries in this way if you really wanted to pay an extra point for +1 EW skill.

Amphibs: Select any role for up to 2 Water Vipers or up to 2 Caimans (any variant for either).

The standard AST bonus, this allows you more freedom in your builds, but it is less useful here than in other factions. The water viper is very survivable, and can bring both smoke and ECM in some variants, but it can’t be part of the MP squads. It can, however, come along with the Mercenary units. Meanwhile the Caimens can be a safe way to get infantry up the table to somewhere dug in, and does so at a low cost, which you may need if you break the bank on a bunch of Samurai.

Mekong Dominion On the Table

With their focus on MP units, shields, and melee skills, the Mekong Dominion will be most advantaged to pick close quarter fights, or to try and build light survivable units relying on dice to keep them safe. These units will be great for scoring missions that require you to be on the enemy table half like Break the Line or Capture. Even a largely generic southern force with a single MP shield expert unit can benefit from this. Some Mekong forces will go all out on melee and they have the tools necessary to get their units into position. While Vibro Katanas are not as good for armor cracking as spike guns, they are a good option to deal with enemy fast movers, and other light units that are relying on rerolls and agile to keep them alive. As with most forces that have mercenary options, I find this to be the most interesting part of the Dominion to play with. You could use it for access to high damage light gears from the North, high tech weapons, high speed hover units from Nu Coal, or any of Peace River’s tricky specialized builds.