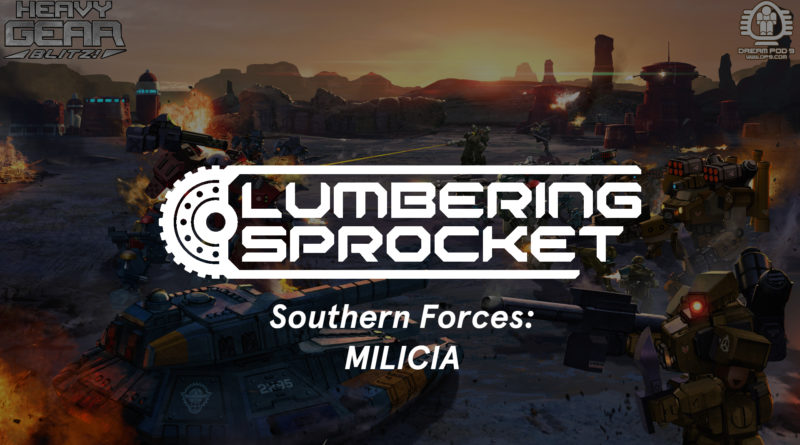 The MILICIA in the story of Heavy Gear

The AST makes use of multiple military detachments. While each League in the south has it’s own local forces, the MILICIA is a collective force responsible for the majority of the dull and ugly duties of warfare. MILICA is actually an acronym meaning Military Intervention and Counter Insurgency Army. Clearly, the Southern Republic knows branding. The forces of the MILICA are generally poorly funded and equipped. They are recruited from poor, desperate, or even criminal populations. Many youths (some no more than 15 years old) are lured by the promise of a paycheck and marketable skills only to find themselves stuck in the worst places on the globe. As such they are certainly the underdogs of the South making up in numbers what they lack in skill or equipment.

The MILICA is a swarm force. You could certainly limit yourself to using Political Officer and Veteran Leaders to make a list that exploits skill points and functions like most others on the table, but conscript is a super rare and valuable ability. There are very few sublists that let you bring more models on the table, and it is worth considering how best to leverage this. Because of conscript, and rules helping commanders, the MILICIA is going to bunch up more than other forces and want to stay in formation which can make them vulnerable to AoE. Luckily, they have access to counter battery systems for defense, and plenty of artillery of their own which can benefit from the very same conscript rule. With the MILICA, you will always have enough soldiers to get the job done. Another thing that can be found in MILICA forces: a cheap core of conscript troops to support a wall of heavy tanks. Leveraging cheap models to buy expensive ones is a trick that MILICA can do like few others.

Any commander can be upgraded to a Veteran ignoring the normal veteran limits.

Remember that any commander – including your free combat group leaders – that gets a skill point has that SP automatically upgraded to a Command Point instead. This allows the MILICIA to have more CP and thus more orders than the average force to help them stay safe or do extra damage. This is especially helpful if you plan to bring a lot of conscripts for bonus points who will want to stay near the commander anyway! Which brings us too…

This rule is a disadvantage in return for TV points. Conscript means the trooper takes a -1 TN to all of it’s skills when outside of formation with a commander (any commander in the force). This means GU 4+ goes to 5+ (i.e. worse). While that can seem crippling, it matters what you are trying to do. Units that are only making opposed rolls, or firing low burst weapons like artillery and bazookas will often not notice the penalty. You should avoid putting it on EW gears (which often have to make unopposed rolls) but it’s worth considering building a squad around it.

On that note, you can also stay close to commanders to avoid the problem, making 2IC worth the upgrade, along with the Political Officer (see below). Conscript points can really add up overtime, and having some field guns, bazooka wielding gears, or squads that can get work done while in formation can allow you to get a few extra units on the board and push a numbers advantage. A squad of five Jager variants and a commander can get a lot of work done, all the more so when the Jagers are all 6 points or less. Another great option is field guns or stingers, which can hang back and lob artillery indirectly, often ending up at 1d6 anyway.

By the way, if you do plan to bunch up a lot with conscript, you may want to look at the CBS and AMS rules. CBS is found in the south – a very rare piece of equipment – and AMS can be found on the standard hunter killer drone as well as a few other models. Both keep you safe from enemy indirect artillery.

For 2 TV one non-commander model can be upgraded to a Political Officer. This acts as a third command option for a combat group (including CGL and 2iC), and comes with the usual 1 CP and ability to give orders to any unit in the force (!) They are not a commander in any other way and only roll initiative if they are the last option.

This allows you to have a very cool option for conversion and also give your troops some support for a low cost. It’s often worth considering making a model with Vet your political officer to exploit the bonus SP. Adding them to a squad that you intend to do a lot of work to assure the re-rolls get used is a good idea, but they might also be useful in a large squad of conscripts to provide an additional command bubble. If you use them in this second function it might be worth putting them in a gear with ECM or ECM+ to provide a defensive bubble for the MILICA they are “inspiring” into action. It is worth stating again that the Political Officer can give orders to ANY combat group, so giving them a gear with Sat-uplink, ECCM, and/or a good EW stat will pay dividends. A model like the Lidded Iguana comes with that, ECCM and +3 EW as well as stealth, making it a great “sit back and yell at the troops” choice.

Water Vipers are a durable, close range support model bringing linked rocket pods and a frag cannon. They are a good addition to basically any squad. The Water Viper SR is an odd profile. It brings excellent EW gear, stealth, and smoke but retains its 6+ EW. I would save actual data scan, jamming, or FO work for one of the south’s many other options. If you bring the Viper SR, it should be because you want more tools to use, or wanted smoke on the unit and had an extra point for the full upgrade. Both Vipers have very limited Roles typically, so being able to bring them out of Role is a nice bonus.

On the Caiman’s (which also includes the Crocodile variants) these are pretty self explanatory. Ordinarily these APCs are limited to the GP role (or FS for Crocodiles) while infantry squads have a lot of options. Being able to bring an APC without it being stuck in a support role is a nice trick. Bringing one along with a squad of infantry inside can also be a good way to round out a combat group, and get some survivable troopers into terrain where they can be hard to remove.

The MILICIA on the table

With access to both conscript and a special commander, MILICIA rely on their commanders more than most factions. It is important when seeing a MILICIA force on the table to take a moment to see how the player is fielding them. Do they have a ton of cheap artillery? Then focusing on getting fast movers behind to take them out is helpful. Are they focusing on grouped units with commanders and defensive tricks like ECM defense and smoke? Removing the commanders will be key. What do you do if you see a bunch of cheap conscripts and a lance of heavy tanks? Play the mission. These kind of forces will have harder times scoring detailed scans, and might try to win by capturing objectives. Isolate and hide from tanks, and remove their numbers advantage by picking off the weaker conscripts.

The MILICA can be played like a skew list and you might feel outnumbered going against them. But once you break their morale that same swarm can quickly be cut down in a hail of AoE fire or weight of dice against their worse pilots. Plan how to take them apart early, and you can send the poor bastards packing.