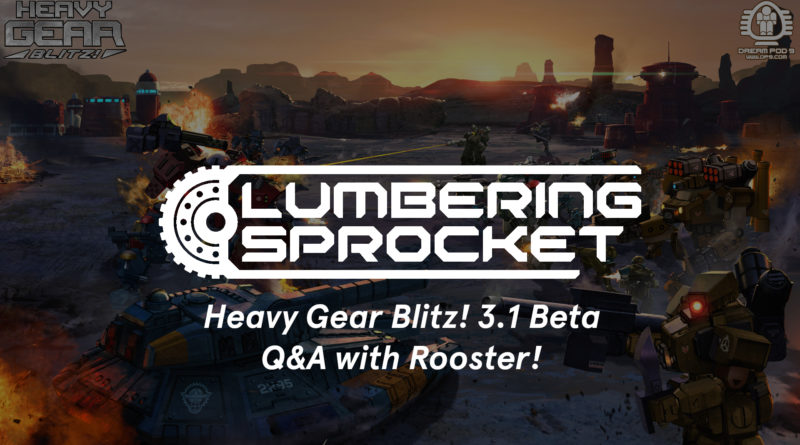 Following our episode on the current 3.1 Heavy Gear Blitz beta, we had some questions from our listeners, but due to time we weren’t able to answer them on the air. Rooster was kind enough to answer the questions though and give us answers to publish here.

Nate: With the rising cost of tin is there any chance of changing materials?

There will be some things that happen in the future. Nothing will be fast. However, depending on how those things go, the story will change.

I can’t really say much until things have actually happened. So, I don’t want to promise anything. Plus, I’m also not the subject matter expert. But I can at least say that Dream Pod 9 is researching different options.

Nate: How do you find time to play with a day job, doing production and everything else in life?

Many think the hours I keep are rather bonkers. My wife certainly does. 😊

One thing I benefit from is ‘not doing production’. I’m a college student in North Carolina. Robert runs the production side of everything from Montreal. That allows more time in one way, which is something some of my predecessors did not have.

I do art management to a limited degree, layout, testing, communicating with testing teams, as well as writing and editing. I have help too, and I’m very thankful for it. I totally couldn’t do all that on my own.

As added background, I am retired military. I’m essentially working at a second career. Although, I can’t say I am in a rush.

Nate: What is your absolute favorite gear/tank/strider/ etc., and why?

That changes from week to week. Right now, I am on a bit of a Cataphract kick. Next week it’s bound to be something else. The more I do deep dives into the lore, and the more I jump from faction to faction for test games, the more things I find that become my favorite.

Nate: Do you play any other TTGs? Which ones do you like, or think are interesting?

I look at different rule sets just to look. Things that I have more recently enjoyed are X-Wing and Test of Honor.

I can generally find something to appreciate about most games. I like seeing innovative approaches. For example, there’s a game called Chain of Command that has an interesting way to deploy. It sets the players up to get through some of the initial phases of maneuvering and into the action faster.

Skoll: Any chance TD might make a move to requiring brace or at least not available while using top speed? Or preferably forward observe and TD becoming standard EW rolls that can be opposed?

Barcode: What the hell happened to Comms, and why?

Allot of us have been using this rule for 9 months or more. It immediately did some positive things right from the start, and we basically haven’t looked back.

Barcode: With the approach of Eden, I’ve done some digging on the modifiers that Vehicles face in Melee. In short, Vehicles of any cost can be reliably hit with MOS>2 from any Gear that can catch them, and any anti-Vehicle Melee plan doesn’t even benefit from Hay-wiring the tank first, because having no Melee weapon puts it on 1d6 to begin with.

An important question for me is, “Are you able to develop tactics and strategies against these types of forces?” And, if I offer my thoughts too much, I am sort of tampering with the ability to acquire that answer for myself.

Barcode: Are you at liberty to discuss how HGB did at Adepticon, and/or share DP9’s plans (if any) based on that performance? It sounds like it went well!

Adepticon went well. Nick and his wife, Lacey, represented Dream Pod 9 really well. We are all specifically proud of both of them.

I think Robert posted a convention schedule on the DP9 website.

Barcode: Not a question, but a comment: as a die-hard mecha fan, HGB continues to be the best “real robot” multiplayer game that I can still play (rest in peace, Hawken). Everyone on the team should pat themselves on the back for me. 😛 Keep it up

Lone: LACs/MACs feel like their use cases are extremely targeted. I’m glancing shots on most non-line gears, and I feel like I need to have Damage 8 base in order to really land things well. MACs are less of an issue, but LACs don’t feel like they’re weapons designed to hurt gears due to needing at least MOS1 to chance damaging middle-of-the-road gears. What are we missing either as players about the role of a weapon like a LAC or a MAC? Or is there some design space room (Such as perhaps an additional attack die for firing in optimal range [I really like the idea of range bands mattering] or the Fusillade rule I mentioned the other day) which would help differentiate these weapons?

It sounds like you want LACs and MACs to do more. I’ll keep that in mind.

Lone: Do you see value in expanding duelist customization to permit weapons not on a default profile being expanded? Examples would be more weapon replacement choices, such as allowing you to replace AC weapons LC. RF. GL, etc., like we have seen with melee weapons?

No immediate plans. Maybe in the future…?

That said, the RPG will be useable as a skirmish tabletop game and will have more crunchy customization features compared to Blitz. The main thing there is, the RPG is a little more, ‘seat of the cockpit’, where Blitz is more, ‘you’re the commander of a platoon’. And, because the RPG zooms in a bit more, on individuals, and individual models, there’s less models to manage, which allows more crunch in the rules pertaining to each model.

Because of all this, the RPG will have even more customization options than Blitz. Not only is the pilot customizable, but the machine the pilot uses has more options as well. And, it will also have an option to play out battles similar to how Blitz plays. They are also looking to make that feature useable even without playing the full RPG. That said, the more crunchy the rules get, the less models you typically want to use, because the added crunch adds more time per model, from a force construction aspect, and a play-time aspect. So, I don’t know if I would ever recommend a 500 TV vs 500 TV game using the tactical rules in the upcoming RPG. That doesn’t seem like good advice. But something around four highly customized gears vs four other highly customized gears is probably at least a good starting point.

So, if you are generally not into RPGs, maybe do not write off the RPG too quickly. It may be exactly what you want.

Lone: How you feel about the state of ECCM Firewall making hacking a much higher and balanced exchange over simply firing PAs at targets?

The change to firewall helps it be more useful. It was previously a bit of a wash. That’s one of the biggest keys.

Thanks again to Rooster for coming on the show and taking time to answer these questions! If you missed the live stream, you can catch it on our Youtube channel: