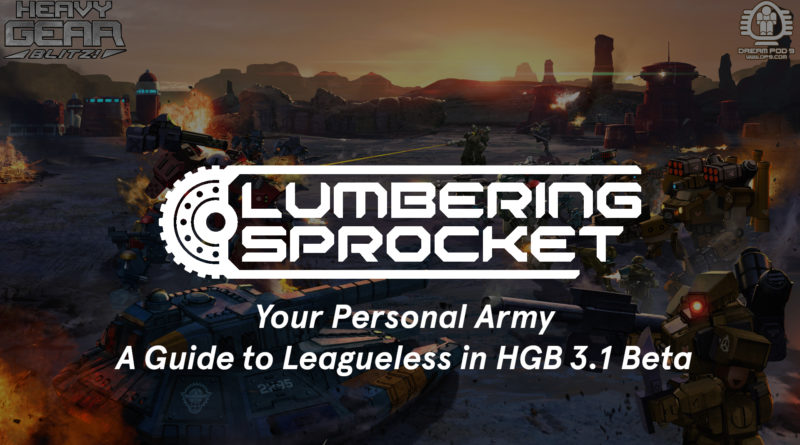 by Red Rick Dias (with images from Heavy Gear rulebooks)

With the beta release of Heavy Gear Blitz! 3.1, Leagueless has received a huge overhaul. Previously one of the weakest and most heavily restricted factions in the game, 3.1 has made them much more flexible. This guide will show how to build an effective Leagueless force, looking at both the faction’s built-in rules as well as useful options they can pick up from other powers such as North, South, Peace River, and NuCoal.

Let’s start with the core rules for Leagueless.

Every Leagueless force gets one Source, which is chosen from the four Terra Novan powers: North, South, Peace River, or NuCoal. This determines your starting model list, and you also get any Universal models marked as available to Leagueless or any of your selected Sources. This means that at the bare minimum, you get nearly the same model list as one of the four main Terra Novan factions.

However, there is one serious limitation: The ‘Judicious’ rule means that any non-duelist model that comes with Vet on its stats may only be in a veteran combat group. This cuts down on players sprinkling rare equipment (from a lore perspective) into every combat group, requiring them to either use only a small amount of it or really lean into the idea and field an entirely veteran force. This is still a huge improvement over 3.0 Leagueless, since the faction can now use Advanced weapons and heavier Armor than they could under the old rules.

After that, you have three upgrade slots to build your own sub-list rules with. These include gaining additional sources, grabbing faction upgrades from a Source, ways to downgrade models in return for discounts on their TV cost, and even various upgrades. This guide will look at each option in detail, and explain the benefits offered by each Source.

Since Sources have the most impact on how a Leagueless force plays, they are our next topic.

While each Leagueless force gets one free Source, it’s possible to spend one of your upgrade slots on one additional Source. Just one; per recent clarification by the developers, the ‘Additional Source’ upgrade can only be taken once. Additionally, most (not all) Sources also offer a ‘sponsored’ or ‘influence’ choice that lets you pick from their “faction upgrades”. Note that “faction upgrade” is a broad term, including not just the top-level options like Hammers of the North or Warrior Elite; it also specifically includes sub-list upgrades! This means things like Norguard’s ‘Pan-Northern’, Peace River Defense Force’s ‘The Best Men and Women for the Job’, and so on are legal so long as your choice meets any restrictions or requirements the sub-list upgrade has. Be careful though, you can only pick one faction to pull these special rules from, if you take Northern Influence, you cannot take Southern or Peace River rules, and vise versa.

With that said, here is a quick overview of each Source and a few of their more interesting models. This is not an exhaustive list, as that would make the article far too long.

A well-rounded Source, North has a little bit of everything but has a slight lean toward Airdrop-capable models and heavy weaponry; their Dogfire R and Dingo are some of the least expensive Light Field Gun models in the game! They also have the Wild Ferret, which at 6 TV is a very low cost ECM platform. The Northern Influence sub-list upgrade also lets you choose from several great options.

The South is a well-rounded Source with no major gaps. However, it focuses on having several low to mid-cost models that are specialized in some way; one might have more durability than similar models, while another may bring extra firepower. South also emphasizes close combat, with a variety of melee and shield upgrades plus some inexpensive models with Flamers. Additionally, their Cobra MP combines above-average armor and firepower on an Airdrop capable model with a shield; it is an excellent way to have a strong mid-field presence. Their Lizard Riders are decent cavalry, allowing a cheap way to fill out a force.

South-specific upgrades of note include:

Note that Conscription is available to Leagueless forces as a normal upgrade choice, so there is no need to bother with picking up the Southern Influence version of it.

Unlike the North and South, Peace River has a very clear combat style: ECM-equipped melee specialists backed by a mix of gears, vehicles, and striders with long range weapons. Players selecting Peace River as a Source will need to either use their Universal models to provide infantry and cavalry, or spend an upgrade slot on an additional Source (such as South or NuCoal) if this is important to the force you are designing. This may be an excellent idea in any event, as Peace River has some models that play particularly well with other factions. The most noteworthy among them include the Pit Bull, which after upgrades can be a 7 TV Agile ECM-equipped model with a good Role list. Their Hyena II offers amazing accuracy on the move, and they have a variety of vehicles that can fill most gaps in a force. There is also the standard Warrior, which offers one of the least expensive LLCs in the game at 8 TV.

This Source has a little bit of everything, but specializes in high Speed, above-average weapon range, and superior commander upgrades compared to the other Terra Novan powers. In addition to good EW gears like the Jerboa, NuCoal boasts one of the best infantry and cavalry model lists in the game; En Koreshi, Lizard Sandriders, GREL Hoverbikes, and general GREL infantry all stand out. Additionally, they have a few North and South models such as the Wildcat and Copperhead.

NuCoal completely lacks a ‘sponsored/influenced’ upgrade. This is probably intentional by the game designers, since freely combining NuCoal sub-list options could lead to some very overpowered forces; mixing KADA’s Heroes of the Arena combined with Jannite Pilots and other upgrades is a quick example, and there are likely other good reasons to not allow a ‘NuCoal Sponsored’ rule.

However, NuCoal source forces do get some interesting things thanks to specific rules interactions. Among them:

Wildcats count as North models and NuCoal models: They show up in both factions’ model lists, and fielding a Wildcat via NuCoal Source still lets you access Task Built. This is because of one key sentence in the North sub-list rules, the one right above Task Built: “All Northern models (emphasis added) have the following rules”. It is perfectly legal to use a Task Built Wildcat via NuCoal Source without taking North as a Source.

Copperheads count as South and NuCoal models: Just like the Wildcat, this appears in both the South and NuCoal model lists. Unfortunately, this doesn’t do anything useful for Leagueless in the 3.1 beta rules; all of South’s faction-wide rules specify ‘South forces’, not ‘South models’. Nonetheless, in the event an ‘all South models’ rule is ever added to the game a NuCoal Source Copperhead could use it.

Having more than one source is usually a good idea; it lets you pick the best possible match for what your force needs. However, any upgrades not spent on an additional source can be used on upgrades built into Leagueless’ single sub-list.

Outside of the sponsored/influenced choices, Leagueless has several upgrades that may be chosen regardless of which Sources you selected. This section will go over each one, pointing out their best uses. One key note: An upgrade allowing you to field certain models in your force does not count as adding them as a Source. Thus, the only ways to get access to the ‘Sponsored/Influence’ upgrades is through your inherent Source or your optional Additional Source.

Rules Clarification: While the beta 3.1 document (as of May 5, 2022) does not say so outright, the developers have clarified that each Leagueless upgrade may be selected only once unless it outright says it can be taken multiple times. This isn’t the same as using an upgrade multiple times; upgrades like Conscription or Discounts may be used more than once provided a legal recipient exists each time. On the other hand, something like Local Knowledge cannot be selected more than once; only one combat group will gain this benefit.

Leagueless in the 3.1 beta takes more studying and decision-making to build a force for, but the payoff is that you can make an army that is tuned exactly the way you want it. No longer constrained by the heavy restrictions they had in 3.0, Leagueless is a much more enjoyable faction now. Outright described in the rulebook as the ‘build your own sub-list’ faction, Leagueless is well worth considering for players willing to put in the time to learn about models in multiple factions!