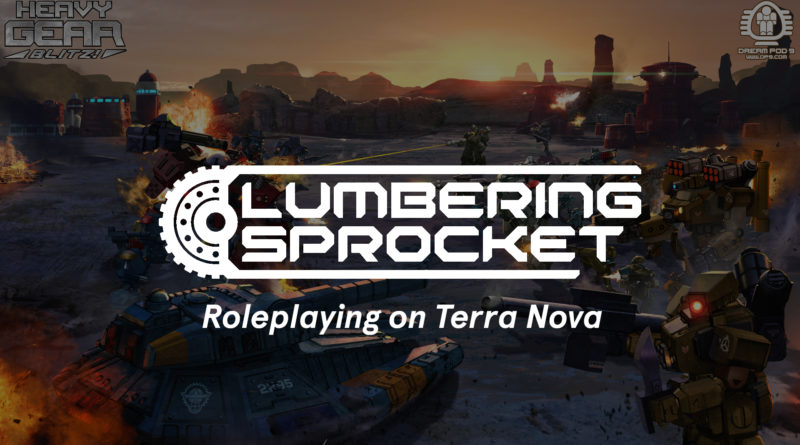 It’s been a long time since the RPG side of Heavy Gear was supported but that is about to change with a new edition in open beta playtesting. You can find more on how to join in on the Dream Pod 9 Forums.

Today is the first of a series of articles on the mechanics of the 4th Edition Heavy Gear RPG. If you have played Blitz, you actually already know a lot about the system. The mechanics of “roll a pool of dice, take the highest, additional dice add +1 to that when they are above a certain number” is also the core of this game. These rolls are called skill tests, and function very similarly to independent or opposed rolls in Blitz. But behind that simple silhouette are a number of more interesting rules. In this article I am going to talk about Edges and Challenges and Character Traits.

One of the things that players critiqued about older versions of Heavy Gear is that the system was mathematically solid, but lacked warmth. There were not huge lists of equipment and circumstances that provided bonuses and penalties, and so play, while tactical, sometimes felt stagnant. Edges and Challenges are just one of many ways we address this in a new and interesting way.

An Edge is anything that helps you complete a task and provides +1d6 to a skill test. Conversely a Challenge is anything that could penalize the task and subtracts -1d6. These bonuses and penalties stack with any others the action would face, but each can only effect you once.

Say your character is sneaking up on an enemy encampment. They are under cover of darkness, it is right after the change of the guard when the new sentries are just waking up, the character is approaching from the direction of a waterfall to hide noises, and they have covered their face and weapons in camouflage paint to make them harder to see. Any of these can be an Edge.

However, if that same character is frightened because they have no backup, carrying a heavy satchel charge which could clatter, and the guards are on alert because they know an enemy is nearby, those could all provide a Challenge.

Lobbying for an Edge or Challenge

Edges and Challenges are not fixed. The GM or ANY player can suggest an Edge or Challenge on any roll for anyone, friend or foe. This is called lobbying. It is up to the GM to decide what makes sense or not, but everyone is encouraged to take part and be creative.

It is easy to see why you might want to lobby for an Edge to a friend or a Challenge to a foe. Why would you ever want to add a Challenge penalty to yourself or a fellow player? Well because it’s the only way you can get better. Unlike other games, XP in Heavy Gear is tracked for each skill independently. When you perform a skill test that takes the penalty for a challenge, you gain XP for that skill. It doesn’t matter if you pass or fail the roll (in fact, often failure is the best teacher).

But, of course, you will have to make sure the challenge makes sense. If you just choose to do cartwheels before every attack the GM (and the other players for that matter) are likely to get annoyed and not let you gain XP but still apply the challenge. However, if you instead talk about how the hit you took last round sent your gear reeling, you struggle to maintain control, pushing against the g-forces and righting the vehicle so as not to lose speed, and swing into a tight curve before firing off balance at your foe – well, everyone is likely to love that and you deserve both the penalty and the XP.

Let’s say Marric, a mercenary gear pilot, is trying to push his Bear Heavy Gear through a burning open air marketplace and melee attack a CEF Hovertank. Marrick doesn’t have a good melee weapon on hand so would normally just be striking with his fists. The Player wants an Edge, so they tell the GM that Marric grabs a nearby parked car in two hands, and smashes it over the tank. That’s awesome enough to be an Edge, so the GM allows it. After being sent reeling from the hit, but still functioning, the Hovertank turns its turret laser on Marrick. The Director says Marrick can dodge clear of the turret, but will have to step through a crowd of panicking civilians to do so. He’ll take a challenge to avoid crushing them. Marrick now has a tough role-playing choice to make. The player counter offers. They say that instead, Marrick lurches towards the shot, putting his gear between the tank and the civilians so that they don’t get hit in the crossfire, hoping his armor will take most of the blow. The roll will still take a challenge, but the player was allowed to choose a way for it to happen that fits their character, and adds drama to the scene.

Character traits are parts of your character from your training, to your background, to your body or personality, to your luck or unexplainable “right stuff”. They are distinct from Skills or Attributes which provide reliable or mathematical bonuses. Traits, like Edges and Challenges are open to interpretation. For example, you might have a “Gunnery-Autocannons” skill and a “Perceptive” attribute that both help you to fire a Gear’s weapon system. But the same character might also have “Hunter’s Instinct” as a trait to represent their lifetime of hunting in the Badlands. This trait could help you shoot your autocannon, but it might also help you track a jeep through the desert, figure out the easiest sucker to play cards against, or realize when a Morganna GREL is about to ambush you.

Character Traits are like your own special rule – and while we provide a handy list of examples– you can also design your own! Character Traits come in three kinds: Aptitudes, Quirks, and Adversities.

Quirks may help or hinder.

When you use a Trait it will give you a bonus or a penalty of 1d6 to a skill test. When to use a bonus is decided by the player and generally will have to make sense for the trait. The Natural Born Warrior trait might make sense for running a sprint, but certainly won’t help when figuring out nuclear physics. You can spend the trait in this way once per session.

A penalty applied by a trait can be applied by anyone, just like with a Challenge. And, just like Challenges they can be lobbied for by any player or the GM. Just like with challenges and XP though, you get paid for accepting it. When you face a penalty from a trait, you get to refresh one of your spent Traits, allowing you to spend it again in the same session.

There is one thing about a trait though: You have to roleplay it! It is not enough to say your character is good at talking so they fast talk their way past a nosy cop. Instead you have to give a few words of dialogue, explain the way they distract or flatter, or reference their backstory in a flashback. This lets you play your character or even invent whole facets of them, and get to know them better.

Sometimes character Traits can also have a direct mathematical effect too. For example, heavy weapons with a lot of recoil specifically apply a penalty if a player does not have the right attributes for them. However, the rules also call out that an appropriate trait can let the player ignore that penalty.

At first, character Traits can sound a lot like lobbying for Edges and Challenges. While you can get a bonus from an Edge anytime you can argue it, a character trait lets you skip that process. It is important for the GM and the player to have a clear understanding of when a trait does and doesn’t make sense. But the concept is there to allow players to help define their character while also providing guidelines for when they should thrive or falter.

With Edges, Challenges, and Character Traits you are given the tools to guide your character through play, and also a little bit of self sufficiency. Lobbying for an edge or spending a trait is your vote for what you want to see happen in the story. At the same time, all of these rules function within a largely predictable dice framework. We also took the time to make that more plain: you will find dice odds in the rulebook so that players and the GM can both know what kind of risks they are taking each time they roll the dice.

The rules in a roleplaying game exist to guide a narrative along a path. But in our opinion, rules are best when they are less like train tracks and more like a map and compass.