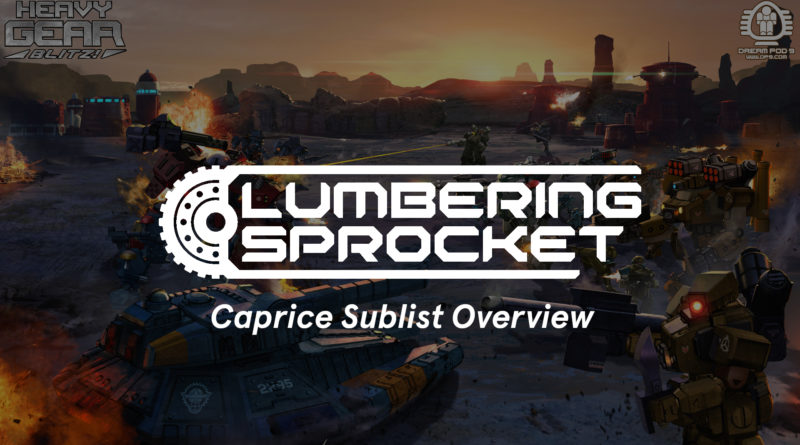 Sub-List Overview is a recurring series focusing on one specific army in Heavy Gear Blitz! As a caveat I don’t play every army. These articles are to give new players a broad idea of how things function.

Caprice in the Story of Heavy Gear

Caprice is a centrally located planet in inter-spacial terms. Faster than light travel in Heavy Gear is only possible through wormhole anomalies and it just so happens that the planetary system is full of them making it the key to the old Earth government’s dominance. When the CEF began it’s conquest of the colonies, it took Caprice first. It’s protection is key their continued war effort, and Terra Nova has sent the Black Talons there in hopes of disrupting the CEF galaxy wide. The only habitable planet in the system, Caprice has a very thin atmosphere on much of its surface, but a great valley that cuts across most of the planet is deep enough to support a breathable area. This trench is all one mega city called Gomorrah dominated by major corporations and built hundreds of meters high. If this sounds very cyberpunk, that’s because it is! Caprice is aiding the CEF, but doesn’t much like them. A significant anti-corporate and anti-CEF group can also be found on the surface areas calling themselves the Liberati. These miners and self-sufficient folk live on the inhospitable parts of the planet in pressurized bases. Some act as contractors for the corporations while others are a resistance movement determined to dislodge the CEF from their home.

The thin atmosphere of Caprice makes VTOL craft less practical. Yet the ground the broken landscape full of canyons and broken ground means traditional tread-craft are also at a disadvantage. This means that most military units need to be able to climb or leap . Capricans innovation for this was large four legged spider-like walkers with climbing spikes and sometimes even jump jets. These are called “Mounts”. All current Caprice mount units are the Strider unit type and have the Stable trait allowing them to move combat speed but still gain a +1d6 to shooting. As such you have a force that tends to have high mobility, but low speed. Able to climb or jet over obstacles, they are always able to put down fire while advancing. Caprice units are much more expensive than the other factions, but you get what you pay for and most of your units will have 8 combined H/S and high armor, meaning they will usually take several hits to put down. Caprice also loves rotary cannons and has a wide access to them. This combined with the ability to climb, means they can get to elevated positions and really use that bonus Gunnery on all their extra dice. Due to their size many Caprice units have bonus Brawler dice and spike guns, allowing them to also mix it up in melee as well.

As with the other smaller factions of Heavy Gear, Caprice has some careful internal balance.

Despite being a smaller faction in terms of total units available, Caprice still has access to three sublists. Today we will talk about the Caprice Invasion Detachment or CID

After its initial defeat on Terra Nova,Earth knew it would need to bring more options to the field on it’s second assault. Earth particularly struggled in the more mountainous or broken ground areas of Terra Nova where Heavy Gears could lay ambushes and move through the terrain without exposing themselves to fire, unlike hovertanks that had to fly high. Caprice’s maneuverable mounts offered a chance to beat Terra Novans at their own game and the CEF has taken it. Corporations with close ties to earth – or those that just want to keep the invaders happy (for now) – have sent along some of their security forces to aid the second attempt to claim Terra Nova. These soldiers are not all happy about their posting, and some even may be actively coordination with Terra Novan Black Talon units while on the face working with the CEF. Regardless, the CID is a professional private military force and quite capable.

Commander’s Investment: The force leader may select any model from Caprice’s list without having to match it to its combat groups’ roles.

This might not seem like a fantastic option at first until you realize how many deadly fire support options you can chose from. In particular Ammon stands out. This beast of a model has two actions and two huge guns, but is fairly pricey. With this trait you can pair it with a few infantry squads or a couple of Accos and bring it as GP, SK, or even RC and gain that bonus deployment range. Another option would be the Jammer Bashan Command variant which gains +1SP, ECCM, and Sat-uplink making it a great mount for a commander that wants to hang back and give out orders.

Allies: You may select models from the CEF, Black Talon, Utopia or Eden (pick one) for secondary roles.

Because this only fills secondary roles it is a fairly limited trait. Additionally, Caprice is well served for both troopers and strike type models. What they most lack are long sensor ranges and cheap chaff. One of those two can be found with Black Talons or the CEF who have some better sensor options. Eden and Utopia can offer some cheap units if you want to try and fill ranks. A special note is also to be made here for GREL which can hold ground very well and can be a cheap add on to your forces for holding objectives.

Melee Specialists: Two models per combat group may take this upgrade if they have the Brawl:1 trait. Upgrade their Brawl:1 trait to Brawl:2 for 1 TV each.

Getting to Melee can be a problem with lower speeds but once you get there some Caprice models can be absolutely terrifying with this add on. Kadesh Mounts for example have Brawl:1 to start and are already armed with MSG which have DAM: 7 with a massive AP:4 With Melee Specialist you can be striking at 4d6 in melee for only one more point. Plus you have a jet pack to help you get there.

Mixed Feelings: Any non-commanders, non-veteran and non-duelist may add the Conscript trait. Reduce the TV of these models by 1 TV per action.

The true selling point of the CID, Mixed Feelings lets you fix your numbers problem. You can use this to spam a bunch of infantry for very low costs. Another good option is for Sniper Acco which already have a poor Gunnery and are simply looking for a single good dice to use with their Precise sniper rifles. Mounts that intend to spend their whole game within 6” of a Bashan with ECM up are also a good option, as are fire support models that are just there to launch indirect fired AoE. 1 dice secondary targets really don’t care what your gunnery is.

Well Supported: Combat groups in this force may purchase any standard upgrade up to two times.

A very corner case upgrade since mounts don’t have arms. This locks them out of several upgrades. Still you might find it is an option that helps so don’t forget it. Also remember that this will apply to your allies as well.

CID on the Tabletop

The CID can function either as a swarm force or a min maxed force by exploiting Conscript. More than the other Caprice forces you are likely to find at least some investment in melee with this group. This can make weapons like bazookas less of a good choice when trying to crack Caprice’s heavy armor, because if they survive they might just stomp on you. When going against CID it is always a good idea to see how the opponent is using Conscripts. If they are trying to keep models in command range, then targeting the commanders is a good strategy. This can also mean that Assasination is a good choice for an objective against them. Likewise, Detailed Scan objectives from Recon units can be well applied here since most Caprice units are going to be looking to get to medium range. You may find that placed objectives will be harder since Caprice can move up and contest them. Then again some variants of the CID will still have low numbers overall, allowing you to swarm past them, or punish a combat group by removing a member or two and lowering the whole force’s ability to contest you.