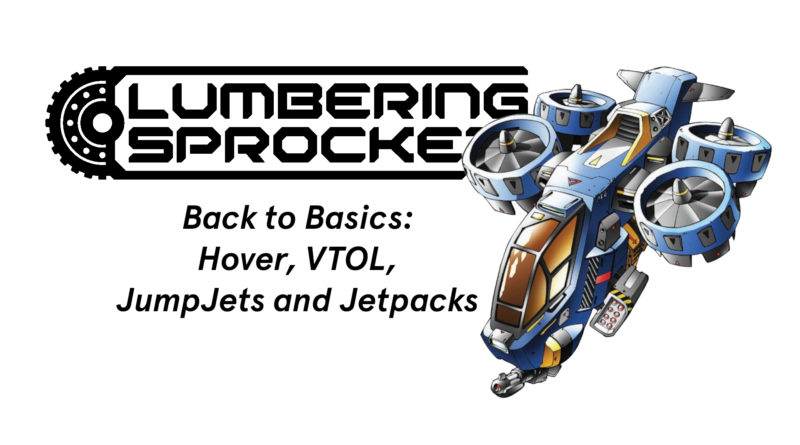 How to coordinate death from above.

Vehicles in Heavy Gear Blitz have a broad variety of movement types from walking robots, to floating hover tanks, to jet packs and rotary flight. While most of these rules share the same basic function, it’s important to know the distinctions. Follow along here and learn how best to get use of your fly-bois.

Hover (H) is one of the basic move types in Heavy Gear Blitz. It moves at normal rate over any surface that is less than 1” high. If forced to move through area terrain more than 1” high. This means most forests, bolder fields, or another feature defined as area terrain like an area of shipping containers or industrial equipment. Walls are an important game distinction here. A wall is a game term representing the edge of any terrain feature (building, cliff, etc) that is more than 45 degrees in slope. If the surface is angled less than that, models can move straight up them without penalty, so your hover effect isn’t really helping you here.

These similarly worded rules function quite differently on the table. First let’s talk about the similarities. When using either Jump Jets or a Jetpack you cannot take actions during the jump. This means no popping up to get a free elevated firing position in the middle of an open field. JumpJets (x) allow for a model to hop or vault over obstacles during its movement up to the (x) listed height. Note that this only works on the walls we described above, so while you can use it to hop up to the top of a mesa, you can’t use it to ignore a woodland.

Jetpack (x) actually is a secondary movement type and replaces your usual one. Let’s take the Jerboa as an example:

It has a move of W/G: 9 and Jetpack: 6. This means it can move 9” walker or ground (using all the usual penalties and bonuses) OR fly 6” using Jetpack movement. Note that this is by movement. This means when going all out, you can walk 9 + Jetpack 6 (in any order), Jetpack twice or walk twice).

When using Jetpack movement, models follow the same rules as Jump Jets above, meaning they can freely move over obstacles up to their Jetpack (x) in height. Just measure horizontally, and make the move. Also keep in mind that difficult or dangerous terrain can still affect the model where it lands, so don’t set down in a minefield.

VTOL craft are things like helicopters or ground effect gunships. They have a choice in how they move along the battlefield. They can fly NOE (nape of the earth) or Elevated.

NOE VTOL move exactly like any other hover vehicle. VTOL can chose to be Elevated at the start of their activation. Once elevated, they ignore all terrain for movement and shooting purposes (though their targets might still get cover if within 1” of it). In effect they are “above” the battlefield, which also means everyone can see them!

There is a unit that combines VTOL movement with jetpack: the Utopia Commando Armiger and N-Kidu. These models have to choose between jetpack and hover just like normal, but could, if they so desired, choose to move slower when elevated.

Using Flight on the Battlefield.

JumpJets, Jetpacks, and VTOL are all tools that allow you to pick your battles. Much of Blitz is a game of mousetrap with models waiting for the correct timing of activation or enemies to spend their actions/react before stepping out of total cover. You can use these movement modes just like climber to pick the optimal time in a turn to move out from behind cover.

Elevation (either from an elevated vehicle or from a model firing from a higher piece of terrain) can really effect your dice rolls as well, and high burst weapons can really benefit from it. CEF frames and hover tanks, or hover tanks from NuCoal and the South all make good use of this.

This means that jet bikes or hover APCs that swoop through enemy forces and end up in an annoying deadzone where no one can see them. It’s perfect for break-the-line, or an unexpected contesting of capture or hold objectives during turn 4.