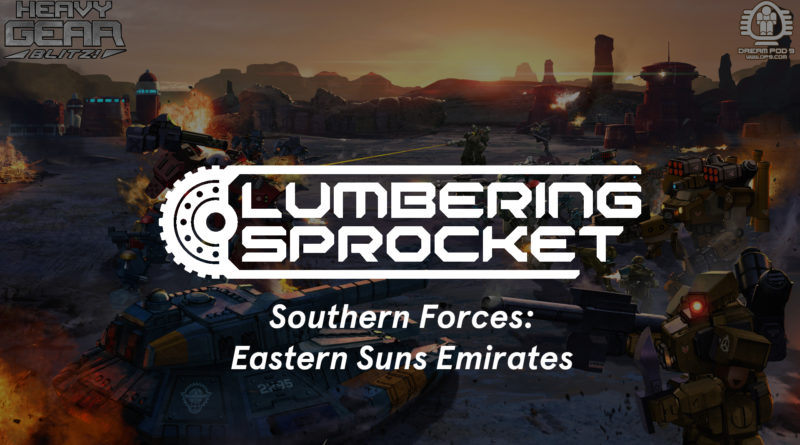 The ESE in the Story of Heavy Gear

Descendants of a crashed gate ship (The Eastern Sun) this league is much more fragmented than any other on Terra Nova consisting of multiple emirs each ruling over their own city-states and territories. A rigid caste system serves to keep social mobility to a minimum and enrich the Emirs allowing them to live decadent lifestyles broken only by near constant squabbles and infighting. Blood sports, barbaric living conditions, and even slavery are daily horrors of the lower castes. However, a recent reformer has taken over as Matriarch seeking to end some of the old ways, abolish slavery, and bring a higher standard of living to the lower castes. The Allied Southern Territories were happy to turn a blind eye in the past to the ESE in return for cheap labor. Now they are being forced to contend with an already fragmented faction falling into a full civil war.

Since ESE forces are maintained by individual Emirs they vary widely in their effectiveness and style. Arms dealers from all around the globe sell in the ESE and the harsh nature of politics means that family members may be impressed into service to assure a trustworthy force. Along with locally produced Iguana gears and other southern gears, you can see vehicles from the North, Nu-Coal, or Peace River as well in an ESE force. The long tradition of dueling and blood sport in the ESE also means that gear duelists can be found in these irregular forces in larger numbers. They will serve as elite bodyguards, or put their honed skills to use on the front lines.

Skavara Manufacturing: Select any Role for Iguana Commanders. GP role is available for any Striking or Gunner Iguana.

The Iguana is a versatile light gear and with this you can put them in a lot of roles. This assures you will almost always have a reason to bring ECM defense and a target designator. A special note here about the Black Box Iguana which has +1SP on it’s profile. If assigned to a commander this SP becomes and CP allowing for more order use.

Personal Escort: The Force Leader’s combat group may include a duelist in addition to any other duelist in the force. That duelist may be in a gear from the North, South, Peace River, or NuCoal (but follows all other Duelist rules).

This is a very cool rule that lets you have a lot of customization in your army build. It’s worth noting that not only can you have two duelists in an ESE force, but you can actually make the army commander a Duelist as well. This could allow you to take the best command gear from any of the Terra Novan factions, and make it more survivable with a shield and agile. You could also use it to bring a unique killing machine to the table. The more you get to know other factions the more deadly this could be. Of course, you could also just use it to bring a gear you think looks cool.

Allies: This force may include models from the North, Peace River, or NuCoal (pick one) so long as they are armor 9 or lower.

Like Escort above, this offers a lot of options for army builds, frankly too many to go into in the scope of this article. You could use it for up-gunned Northern gears, NuCoal hover gears, or some of the melee, ECM, or Stealth specialists from Peace River. Either way, this also makes it possible to make an ESE army easily if you have one of the other factions, or even run your existing non-southern force as an ESE force to use Personal Escort for a bonus duelist.

Amphibs: Select any role for up to 2 Water Vipers or up to 2 Caimans (any variant for either).

The standard AST bonus, this allows you more freedom in your builds. The water viper is very survivable, and can bring both smoke and ECM in some variants, though the later is less useful for the ESE with it’s Iguana commanders. Meanwhile the Caimens can be a safe way to get infantry up the table to somewhere dug in, and does so at a low cost. With Allies this could even allow you to bring Sand Riders or GREL into battle.

The ESE on the Table

It’s hard to characterize the ESE on the table because every force has the potential to be so different. Duelists, can be point sinks, but the access to two of them, if carefully crafted, can make for two super powered gears supported well by reliable southern staples.

The choice of Iguana commanders can mean that assassinate is a little easier against the ESE. But with a broad range of allied gears, it’s far from a sure thing. Getting broad access to EW gear is very convenient and offers lots of ways to project threat in your list.

More than almost any other faction, the ESE is ideal for collectors who want to expand their non southern force with some southern models, or make a melange of units to unlock hidden potential. South has the largest catalogue of Gears, so when picking your allies be sure to emphasize the things that South doesn’t naturally do as well. Specifically, focus on PRDF’s airdrop units, or NuCoal’s better infantry (Grels and Sandriders) or fast units like Chasseur MK2. If you are not familiar with a gear, look at its datacard and try and understand why it was picked in the context of the force. Just like their rulers might be selfish or magnanimous, the pilots of the force can come in any flavor and with all the perks and flaws of their chosen blend of factions.

If you’re not emphasizing the strength of ESE, namely wide access to Iguanas, allies that can fill gaps, or the additional duelist, you’re better off with MILICIA.