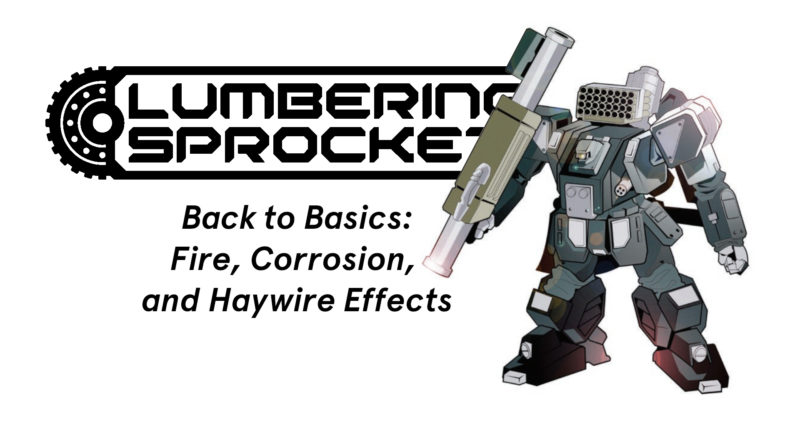 Sometimes a 35mm high explosive projectile is just not good enough for your enemies. Heavy Gear Blitz provides a few options for exotic ammo types to kill things in creative ways. Let’s take a look at how these special weapon traits work, and how to protect yourself from them.

Fire in Heavy Gear Blitz represents everything from phosphorous incendiaries, to jellied fuel like napalm. Unlike other games, it doesn’t last over multiple rounds, but it does allow you to deal with a number of things that are otherwise hard to hurt. When a weapon with Fire: X hits, you do damage based on the MoS and DAM of the weapon just like normal. Then you roll a number of dice equal to its Fire trait. Any that score a 4+ do a point of damage. This means you can do damage even if the armor was too high for the weapon to damage the target, or if damage is capped such as with infantry. This makes fire weapons an ideal equalizer just like AP or AI for dealing with special threats.

Worth noting here too is the Spray rule found on Flamers that lets them ignore cover bonuses, helping further deal with those annoying infantry.

Factions That Use Fire Weapons

Fire weapons are currently limited to the Flamer or AP Rocket Pods. While almost every faction has at least some access to fire, the South deploys it most extensively from the humble Flame Jager to the terrifying Blazing Drake with it’s Fire: 3 linked HARP. The presence of heavy jungles in the Dominion, and a general attitude of brutal recrimination in it’s black ops and counter insurgency wings account for this specialization.

It’s notable that the CEF is totally lacking in flame weapons except for the universal Napalm Airstrike counter everyone can buy. They can recruit allies in the form of the Caprice Pyro Acco, Utopian Fire Apes, and the Eden Ignius upgraded Golems, but in general there is a lack of fire weapons among the invaders.

Corrosion eats away at units over time. It’s a very rare ability in Blitz but worth knowing about anyway. Corrosion weapons do normal damage, but then add a corrosion token. Unless cleared off by an engineer, each token will do an automatic point of damage on a 4+ during the cleanup phase. You can only have one corrosion token at a time, so this isn’t the best way to take out heavy armor or high H/S units, but every little bit helps.

Factions That Use Corrosion Weapons

Currently the only corrosion weapons found in Blitz are on the Sand Riders available to NuCoal and their sub lists. They make use of deadly White Sand found in pockets on Terra Nova which can dissolve almost anything. By using a special process only known to them, they are able to temporarily preserve the sand in their warheads, to spread it to enemy vehicles.

From one of our readers, Kaz:

Hello! Small thing I would add on your recent article relating to status effects: in the corrosion section you can also get corrosive weapons for utopia if you do OUF sub list for Greenway Caustics. Can be a fun way to get the effect with FO into FM on a group of enemies!

Found on Particle Accelerators, and through the ECM Hack action. It causes the unit to function as if crippled suffering -1d6 on actions and being prevented from going All Out. It also does one point of damage on a 4+ making it another way to worry away at a high armor target. While a model can only suffer a haywire token once, each instance can still do damage. The crippled effect is by far the most useful part of Haywire, as it not only prevents the use of all Aux equipment, but significantly impacts how effective the enemy can be. It also drops ECM protect bubbles allowing you to degrade the effectiveness of enemy defenses.

Factions That Use Haywire

Any faction with access to ECM Hacking can use Haywire meaning that everyone can build for it. Some stand outs of this are Peace River which has a plethora of ECM models, and a few very high EW ones, the South and Black Talons who have stealth hacking options, and the UMF of the North who can add bonus dice to hacking attempts with an upgrade.

If you prefer your hacking accomplished at a measurable percentage of the speed of light, you can look to the CEF which has the widest deployment of Particle Accelerators. These weapons cause electromagnetic disturbances and might even fry a pilot in their cockpit. Most other factions have at least a few profiles with these weapons, but they are most common among the CEF and it’s allies.

Protecting Yourself From Special Damage Types

There are a few ways to protect yourself from fire, corrosion, and haywire. Field Armor doesn’t help here as it specifically notes that it doesn’t prevent these special damage types. However the Resist: Haywire, Resist: Corrosion, and Resist: Fire traits can be added to a Veteran vehicle via the Insulated, Stainless Steel, and Fireproof traits (respectively). A special note on Haywire: this upgrade only prevents the damage, not the cripple effect. Still, it can be worth considering on a high H/S vehicle.

Generally though, these special damage types are something you have to live with. Another danger of the 62nd century battlefield, and another tool to use against your opponents.