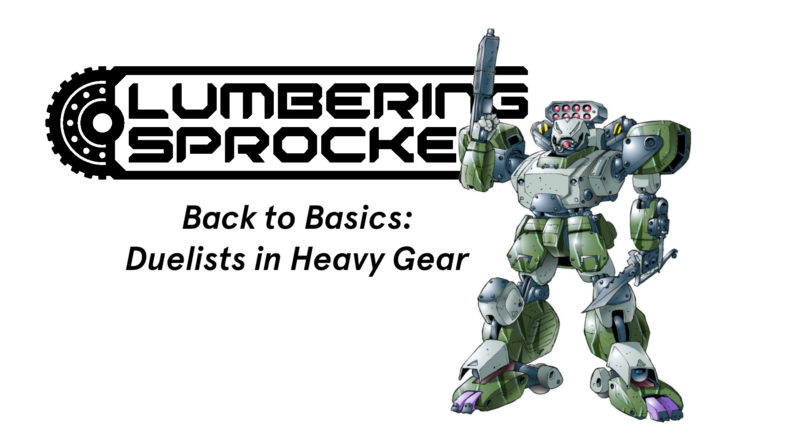 Blitz allows for more customization than almost any other wargame. But what if you want to trick out a gear to be the ultimate killing machine, and do it with grace? Look no further than the duelist.

Dueling and Duelists in the Story of Heavy Gear Blitz

During the post-colonial era on Terra Nova, life was hard. The early colonists were abandoned and much of their governance and legal system with it. With isolated city-states or settlements, it was difficult to have a centralized justice system. This need for frontier justice saw the reinvention of an age-old system: the duel.

Some form of a duel exists in almost every Terra Novan nation with legal codes sometimes allowing for it openly, or some authorities willing to be lenient towards an honorable duel. While it might be accomplished by fists, pistol, rapier, chess, or even something esoteric such as comparing seasonal profit margins, the duel is part of the culture. Televised heavy gear arena combat with sporting weapons (or sometimes with regular ones in the underground) remains one of the most popular pastimes on the planet.

In a military context, all four major factions have duelists within their ranks. These highly skilled individuals act as both cheerleaders and moral support for their regiments, as well as direct combatants on the battlefield. When forces have fought to a stalemate, or face the prospect of a last stand, it is the duty of a duelist to try to resolve the situation with single combat to prevent a greater loss of life. While the CEF doesn’t share the same cultural imperative (with the exception of Eden), there are among it’s ranks skilled soldiers that through competitiveness, or a willingness to exploit Terra Novan culture, fulfill much the same role.

All factions can purchase a duelist upgrade. Duelists must be piloting a gear (or a strider in Caprice lists) but sub-lists may allow them to be placed in a strider or even a hover tank! Upgrading a duelist is the same cost as purchasing a veteran, is included in the cost of models with the Vet trait, and unlocks access to both veteran upgrades and duelist upgrades.

While a duelist can be a part of a combat group, you can also choose to field them as a combat group of one. If acting as an Independent Operator, they are not a CGL (but could still be upgraded to a CO, XO, or TFC). This can be a good strategy for more elite lists with a small number of combat groups so that you can still have some order of activation control and access to additional CG roles for objective selection.

We are not going to go too deep on the duelist upgrades here (since most are self explanatory direct bonuses) but will give some examples below. Just don’t forget that you can freely combine all types of upgrades (vehicle, standard, sub-list, veteran, commander, and duelist) on a duelist.

Duelists also have a special rule that impacts how they play on the table. When a duelist damages an enemy model, every friendly model within 12” gains a free skill point (or CP for commanders) this point goes away once you use it, but can really support your forces. If the enemy has a duelist as well, you can only trigger this special rule by damaging the enemy duelist. Once they are destroyed, everyone else is free game, but this rule encourages some cinematic one-on-one contests.

As always with heavy gear blitz, there are tons of ways to customize your duelist. Just a word of warning though: putting too many points into a duelist can be a trap. They are only one model – however powerful they might be – and can still get merked from a bad roll. It’s also worthy to note that a solo duelist with the FS role can be a liability if your opponent has access to the Wipe Them Out objective since it allows them to score two victory points by killing a single model.

We are going to go into some of the basic archetypes of duelist below but your meta, list, and play style will likely determine what kind is best for you. More than almost anything else in Blitz a duelist is a chance to be creative and find hidden gems.

Disclaimer: The below Duelists are all certified cool. How good they are is up to your meta and play style.

These kind of duelists will pick gears with high Brawl and ideally a high PI stat and melee weapon. They will upgrade or swap their weapon with the Old Reliable vet upgrade (if needed) and buy extra levels of Brawl with the In Your Face veteran upgrade. You can even add Paired Weapons for +1 burst. There are generally two ways to do well here. One is to get a high AP weapon and go for a lot of dice. The other is to focus on getting as high a result as possible to hunt models with hi ARM. The other (cheaper) option is to buy additional actions, start with a high damage weapon (such as those available from Smash Fest) and try to hit several times or several models. Remember that melee weapons can be used as many times as you have actions! Some sub-lists, like the SRA for the South have access to extra brawl dice in addition to these vet upgrades and can get into absurd territory.

Disadvantages of this kind of build is that most high PI gears tend to be lighter, and you will have to get pretty close to do your damage against most forces.

This kind of duelist is going to load up on big guns and wreck from a distance. They can use Gun-Slinger for bonus burst on cannons, or add precise, split, or auto to weapons. Remember that the veteran upgrade Sharp Shooter can be bought to increase your GU but gets pretty expensive pretty quick. There are too many ranged weapons to go deep here, but I’ll give two interesting examples. The first is getting a gear with paired auto-cannons with Gunslinger, adding more Split with trick shot, stable from Ace Gunner, and maybe even Sharp Shooter to make all those dice hit on a lower number. You use this to hit multiple targets with a single action, keeping the cost of action based upgrades down. Another option would be to buy a high damage weapon and add Crack Shot for Precise, perhaps again adding stable with Ace Gunner. Moving from place to place and trying to wreck lighter targets with single high power attacks.

Disadvantages of this kind of duelist is that they can get expensive quickly and will require the risk of reaction fire most of the time when they go to strike.

Lead By Example is a powerful rule, especially if the duelist is going to be close to your forces and activate early in the turn. The skill points they generate can keep your forces safe, be used on the offensive, and for Commanders become a CP letting them give another order. This kind of duelist works best in a larger combat group that you intend to do work early in the turn either by taking ground, harassing the enemy, or putting out ECM and jamming. In this case the duelist is only trying to damage the enemy, even if it is only for a single point. Laser weapons or long range weapons with precise (like rifles) are good for this. AP should also be something to consider to assure the damage gets done. A duelist with a indirect weapon could also work well, provided you have reliable forward observers. An anti-tank missile or mortar fired from the safety of total cover, but still within 12” of your friendly lines could boost morale dramatically.

The downsides here is that your duelist may end up in a bad position because you are trying to stay close to friendlies, or it might encourage you to bunch up to much to exploit Lead By Example.

A good option for a cheap duelist, you can purchase the EW Specialist skill on a gear with ECM and ECCM to jam signals very effectively. Extra actions can let you do this in the reactive turn, or auto on weapons could free you up to hack during your activation and still pose a threat with your guns. Access to shields or agile from duelist upgrades can also help the duelist be more survivable to keep an ECM bubble out for their friends, and with EW specialist and the right gear, you can be essentially unhackable.

Of course, there are flaws here too. While most EW and Scout focused gears have good piloting and agile, you can still mess up both the roll and re-roll and go down hard from pretty standard weapons.

Being immortal is a pretty neat skill. Using the veteran upgrades for field armor or immunizes (to haywire, corrosion, or fire) this duelist picks a huge gear and gives it Agile and a Shield. With their native reroll and maybe even Defender upgrade for AMS, this duelist can become very hard to remove. Put them on an objective in cover (maybe in smoke or ECM defense as well) and force your opponent to blow actions trying to kill them.

However most of the heaviest gears are already pretty expensive. Putting all your eggs in one basket, even if that basket is unbreakable, still means most of your TV is in one place on the board and you can be outmaneuvered.

This duelist leads from the front by purchasing XO or another command upgrade, or being fielded with a full combat group. They function as the force commander. While on the surface this seems largely just for fluff reasons, there is some synergy to this duelist. It can make for a hard to assassinate or scan model. Their Vet skill point also becomes a command point to be used for orders.

The command hero is a way to build a cool leader for your force, but also means putting your army commander in dangerous positions to get the most out of them. How useful his seems tactically will depend a lot on your meta

The Hybrid or Multi-Tasker

The final kind of duelist to consider is a mixture of upgrades. For example bring a melee monster in a gear with EW and add EW specialist. Bringing a Gun-Slinger and planning to act like the Cheerleader. Upgrading a few shooting skills on a short range model and also buying a cheap melee weapon and a dice of brawl to give you some AP options.

The downside is diminishing returns. A duelist that is good and shooting and melee can’t generally use both in the same turn. A ECM monster that also has huge guns may have to decide between which to use each turn, or spend extra points on actions to do them both then become a point sink.

Duelists are an excellent opportunity to add a hyper-customized or converted model to your force and for that reason alone, you should consider having one. They are also good as a cheap combat group if you end up with a build you like but need another combat group, or want to add a role you don’t have already for objective purposes. Even if you only buy a stock vet added into an existing combat group, Lead By Example, still lets them do something cool for your force. Play around with them and you might find something really deadly.