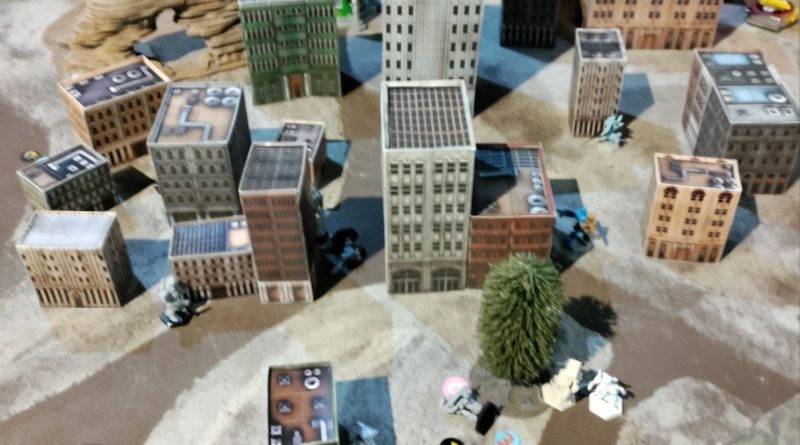 Training in the desert with paint.  UMF vs NorGuard.

Lt. Thurmond deployed her squads based on regiment command’s briefing packet.  The Recon squad with Lt. Lyon Tracer (Pathfinder Jaguar) deployed on the right, to protect that flank, and probe for an advance, with Strike Squad (Go Wind Snakes!) advanced their deployment on the left.  She positioned Azeri (Grizzly)and Riveria (Flash Jaguar) to cover the approach up the middle while she personally lead Marcos (Mad Dog R) and Haez (Mad Dog R) in her Weasel.

The ‘Blue Boys’ commander took up early positions on the opposite side of town, Their two squads lining up, and Lt. Tracer’s opposite number remaining behind cover.  One squad looked to split it’s movement, following a strike push up the middle by cheetahs with tigers and jaguars, while the lion and hunter moved around to seize possible objectives outside of the town center.

Note: I think we made a mistake here and only selected 2 objectives each

Lt. Thurmond noticed the signal from the umpires to start the mission.  “Group two to your assigned positions, Group two on me, we’re going to snip that flank attack!”  As she kicked the throttle forward up to cover behind a small apartment block she saw her first signs of the enemy.  A lion just behind another residential block. “Targets on clean scans, mark them as you move!” (Let them have it ordered), and sent a prearranged ‘hacking ping’ to the Lightning lion.  The umpires ran the calculations and declared the lion to be disabled, as it’s systems simulated chaotic haywire.

Marcos (Mad Dog R) slid into place just in front of her, blocking line of sight down Bank St. and and waited for the Lion to break cover, followed shortly by Haez in her Mad Dog R.  Meanwhile,

Crp Riveria (Flash Jaguar) sped out around a corner into the city center, and did minor damage to a ‘blue boys’ hunter’s engine pack…though it’s torso (or so the judge claimed as it was marked crippled.) while Sargent Azeri (Grizzly) a load of rockets, dropping a hundred weight of paint to little effect.

“In-coming fi-re”  pinged Thumond’s (Weasel) tac computer as a double volley of rockets came hoving in from a fire Jag that just danced into the edge of it’s sensor range.  Building on one side of her, and Mad Dogs to the left and right left little places to go, as paint splattered everywhere.  Her computer acknowledged the umpire’s command as her ride and both Mad Dogs slouched from the simulated damage.

A Blue Boy’s tiger with a snub cannon dashed up the middle, only to get damaged by fire from Azeri’s autocannon in a spectacular display of marksmanship, throwing off it’s aim.

As Thumond struggled to keep her Weasel active, a strike cheetah started a run down Bank Street.  Ulm (Mad Dog R) emptied her HAC’s mag, painting the street, and most of the cheetah yellow, but not before it got its shot off.  More rockets sprayed Dog Pack Command, though with little to show for it, even against the badly damaged gears.

Blue Boy Squad One was moving in to capitalize on the disarray.  The lion moved out of cover, only to get blasted by a fresh AC volley from Ulm (Mad Dog), paint splashing liberally over the thickest armor, though with little damage to show for it.  But the 2nd volley from the fire jaguar.  Paint splashed everywhere as Thumond’s screens went dark.  Her gear settled back into a rest position as she fumed. “Howard, you better know what you’re doing.”  Little did she know that Haez was cursing up a blue streak from her now shut down Mad Dog.  Marcos was by himself holding the whole flank in a crippled gear, older than his granddad.  The Hunter UC broke cover and started limping towards the outskirts of town, keeping a residential block between the two war machines.

In the center of town, an unseen battle of computers and code was taking place.  Srg Howard Fine (White Cat) and Virginia were attempting to overwhelm a Blue Boys White Cat, knocking it’s systems out, but failing to do anything permanent, it’s electronics restarting without a fuss.  The Tiger dashed right up the middle of the City Center, crossing Bank Street, and opened fire on Riveria’s Jaguar.  The snub cannon rounds nearly severed her ride’s leg, but whatever triumph was short lived when her return shot hit it right in the omni-cam.  She would probably be out soon, but man, she was going to rub that in later, even with the judge berating her over actually damaging equipment.

Several massed volleys of light rockets came spiraling in, centered on Azrai’s Grizzly.  Outside ECM, with Riveria crippled next to him, and Kelly Howard’s open topped bricklayer right behind him he decided to ‘die’ a hero.  He threw his machine into the teeth of the attacks, explosions and shrapnel scoured his gear, leaving him unscathed as the smoke and flame (paint) cleared.  (Everything, and I mean EVERTHING missed), leaving the angry bear growling downtown.

“Now it’s Lyon Tracer’s day” (Pathfinder Jaguar, and duelist extraordinaire).  He had already shown his rival who was boss when he nearly blew the Lion duelist’s arm off with a rifle shot, it’s field armor staving off crippling damage.  Now, Sarget Fine (White Cat) had just informed him that another Strike Cheetah had just moved into the shadow of another building.  Now, treads peeling out on the cracked blacktop, he sped around the corner.  Just sitting there was a blue boy cheetah, asking for it.  Lining up his shot, Tracer placed a 90mm round under the light gear’s armpit, ‘ripping’ off it’s engine pack, but leaving the gear undamaged.  Well, the umpire said it was a knock out blow, though not as spectacular, but all knew how skilled Lyon Tracer truely was.  He could hear cursing from Kelly Howard (Bricklayer) as she welded Riveria’s leg back on.  Ah, both were fine ladies, he mused, one who appreciated the finer points of jaguars and sniping, and the other, feisty and a vibrosword enthusiast.  Too bad both were married.  Lyon recentered himself, and waited for his opposite number to come back out again.

Marcos meanwhile was panicking, Thankfully the lion wasn’t showing itself, that PA would have been messy, but now two jaguars were closing on her.  She fell back to a grove of trees, hopefully somewhere near Howard’s bricklayer.  She flinched when she heard the lighting burst echoing through the buildings.

“Darn darn darn” The curses just pounded through her head as Riveria just barely dodged the particle blast from a lion on the prowl.  “Where did he come from, and why didn’t Ulm…oh no, not Ulm!” Another blast of rockets, artillery this time from that Blue Boy Duelist, splattered green paint everywhere.  And through the storm of paint and…more paint, Yen’s Grizzly thundered down Crest street, volley after volley of rockets spirling in towards the lightning lion.  She added a blast from her laser, holding steady to improve her aim.  “I wonder if the paint will be dried by the time the umpires let him out.” she mused.  The judges reversed their decision, and marked the lion active again.  “What!!!”

Kelly (Bricklayer) quickly sped back to the outskirts of town.  More cripples to shepherd, no chance to practice with her new vibro blade, and *chathunk* her computer screaming about ‘damage’ to her engine, ‘unnoticed’ in the last volley.  “Darn umpires” *chathunkthunkthunk*

She made it to Ulm’s (Mad Dog R)position and started repairs, just as the Blue Boy commander rounded the corner and soaked them both.  The umpire marked both gears knocked out while she was still spitting out paint, though when she did get her goggles off, she noticed the guy was sporting some new modern art himself.  “Must be entering his ‘yellow’ period.”

Howard Fine was cursing himself.  Riviera’s Jaguar had just gotten knocked out by that blue boy duelist.  Now he was dashing over to Ulm and Kelly’s last positions, while Virgil Virginia’s Ferret was long gone, having rushed down the far side of town, leaving Azeri (Grizzly) and that jerk Tracer to hold the rapidly empty center of town.  He quickly hacked the assault jaguar, and hunkered down to weather the oncoming storm as the big cat jerked and twitched.  He rolled his eyes as Tracer (Pathfinder Jaguar and Duelist extraordinaire) started trash talking after crippling the lion duelist.  The fire Jaguar sauntered down Bank Street, and leveled his fire against Howard’s cheetah, thankfully though, the ECM and trees managed to stop the worst of it, the judges determining no damage was done.

Azeri (Grizzly) wasn’t having as good a time.  His ride was suffering from a cascade of electonic noise and jitters as the blue boy white cat managed to get inside his systems.  The fire wall stopped the worst of it, but it was eating processing power his N-Net needed to keep guns on target and manage his mobile systems.  Despite that, he turned down Bank Street, and managed to sight two jaguars.  Leaving his secondary systems to track the crippled snub cannon carrier, he fired a full double spread into the fire jaguar’s back.  Half a dozen rockets painted the blue boy yellow, while the few that missed spireled off into the crippled assault jaguar.  Suddenly Yen Azeri was having a good day again.  He maneuvered his still jittery gear back around to face off against the lion.

Virgil (Wild Ferret) dashed around the far edge of town.  “Come on, I know that duelist is around here somewhere, if I get him I’ll be the hero!”  He was still fuming from all of his EW scripts being foiled by enemy ECM.  Nothing seemed to have worked today.  He checked the mag on his SMG.  Still full.  “Yeah, I haven’t fired a shot yet.”  He thought.

Rounding the corner, he saw the Lion Duelist, unmarked aside from paint over two vital areas.  “Alright Virgil, now’s your time to shine.  Take the objectives, blast that cat, be the hero!”  He dumped the entire clip into the lion’s back.  The machine shuddered.  Virgil was elated, Tracer was screaming through his head set “You better not have bigfootted my kill Virgin Virgil!”  The Lion shuddered again.  Virgil backed off to keep the heavier machine from falling on him.  *do-dink* his computer pinged.  *um-pire re-port no da-mage to targ-et.*  “wait what?” as the lion turned around, and backhanded his ferret nearly in a circle.  Then tapped the back hull behind his cockpit with an inactive vibroblade.  The last thing he heard was Tracer over the comms “Man, you blew it loser.”

Victory goes to me, though barely.  Only paint rounds prevented half a score of filled coffins.

Game went great.  We both had spots where the dice swung wildly in our favor, and wildly against, usually when one was good, the other was getting their terrible rolls in.  I keep forgetting how durable grizzlies can be, and how much they can poor out.  I think both of us suffered a bit as we forgot about our objectives for most of turn two, and just blasted away.  Also, we had the worst ECM/Haywire rolls.  Out of about 10 between ECM attacks and a LPA I think we only did one haywire damage (to my white cat).  For me, lesson learned was not to group up as much, though there isn’t much you can do when you opponent rolls a 9 on 3d6, and you get a 6 on 4d6.  Poor Weasel.  Also, slower melee has to work harder to get in close.  My bricklayer (a vet melee beat stick) spent more time repairing than fighting because it couldn’t drive close enough to hit anyone with her sword.  The Lion duelist was in the same boat.  To close in was to get shot.  That empty town center was a major kill zone.