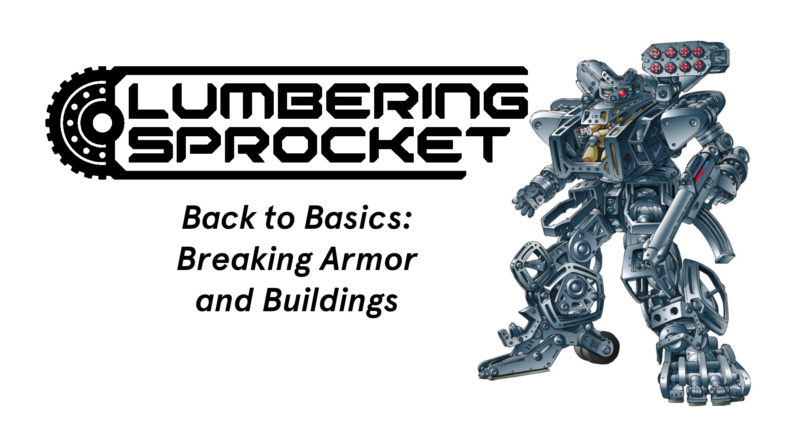 Heavy Gear Blitz is a game of attrition, with the largest pieces sometimes taking multiple attacks or even several rounds to remove. It also provides very clear rules for damaging and destroying buildings, trees, or even solid rocks! Even though there are rules, it doesn’t mean that it’s obvious what is the best way to go about doing it. What tools make your demolition job easier? Let’s figure out how to break stuff.

The Mammoth in the Room

If you have never run into high armor (10 or 11, with 8 boxes of Hull and Structure) then your first time seeing it on the table can come as a bit of a shock. Survivability skew, either by having high armor – or units that can take a lot of damage before being crippled or removed – can be a factor in Heavy Gear.

Typically, the way to deal with high armor units is to just try to win the scenario rather than the firefight. However sometimes you just need to take down a Mammoth. High damage weapons, like Anti-Tank Missiles, Railguns, Tank Guns, or Heavy versions of just about anything can be helpful. However, those come with a price tag, or at least including them can disrupt your list composition. AP is much easier to find and include in a list, and just might be your better bet.

AP is a trait found on some weapons. You find low levels of AP all over from the lowly Light Rocket Pod, Grenades, or Vibroblades. AP means that a successful hit that would have been blocked by armor, will inflict a minimum amount of damage anyway. This damage is equal to your MoS, and capped by AP.

Typically, the amount of damage you to do a target is calculated as follows:

However, if the weapon has AP: X, you will do damage equal to the Margin of Success, with a minimum of 1 damage for MoS 0 and a maximum damage of your AP value. If you would do more damage without accounting for AP, i.e. you shoot a low-AR thing with a big gun, you will take the better damage result.

Let’s show how all of this works with an example:

Say we have a NuCoal Lancier Spear trying to take down a Mammoth strider. The Lancier has both a MRP (Dam 8, AP1) and Medium Spike Gun (Dam 7, AP 4). Meanwhile the Mammoth has armor 11.

The Lancier Attacks and gets an MoS of 2 against the Strider.

Now let’s say the Lancier hit really well and got an MoS 5.

Hopefully this shows how you can chip away at high armor targets with units that otherwise don’t seem strong enough to finish the job. Remember though, Heavy Gear is a game of managing activations. Large tanks and striders tend to have high armor and H/S scores that total 8 points. AP: 1 may seem like it can affect them on paper, but when you get to the table, that means you’ll likely have to shoot a big target 8 times with rocket pods before bringing it down!

Compare that to getting a competent melee specialist into the fray and rolling well! You could conceivably take down a large target in just two hits by rolling MoS 4 or greater twice with an AP:4 weapon like a spike gun!

Any structure in Heavy Gear can potentially be destroyed and there are a large variety of buildings available for purchase for your forces. Buildings are hard to take down though having very high armor and lots of structure and hull. They also have to be directly attacked and dont take damage as a secondary target. There is one easy way to wreck buildings though: the Demo trait.

Found on Shaped Charges (available as a standard upgrade), worker gears in the universal section, and as a weapon upgrade for duelist, Demo is a trait that only effects buildings. Demo functions differently than AP. When a weapon with Demo hits a building, it takes damage equal to the Demo of the weapon. If your total roll would result in more damage, then you can use that instead, but Demo assures that actions spent wrecking a building won’t be in vain.

Again, keep in mind the total number of activations that will be required to take down a building and plan accordingly!