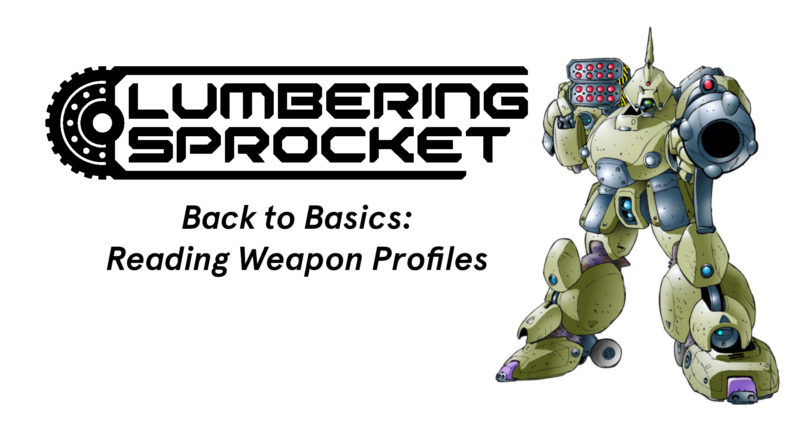 Both troops and their weapons have profiles. Below we are going to explain how to read weapon profiles in heavy gear blitz. The full rules for weapon profiles can be found on page 135 of the basic rule book and the full weapons table is on page 157. Here is an example of the weapons section from the Jager profile:

You can see from this that even the most basic gears bring a lot to the table in Heavy Gear Blitz. But each weapon has a very specific use on the battlefield. Let’s take a look at the fairly basic Light Autocannon (coded as “LAC” below)

Weapon codes are the abbreviation for each kind of weapon in Heavy Gear. While the various factions all produce their own arms, the idea is that largely equivalent weapons systems exist across factions. Weapon codes contain two parts, the weapon class and abbreviation. \

Class is first and will always be L, M, or H standing for “light,” “medium,” or “heavy.” This makes the most sense when you look at the full weapons list in the appendix of the basic rules and see that each level adds one point of damage to the weapon. Oftentimes other traits of the weapon like its AP or Armor Piercing value will also increase with weapon class, albeit not necessarily by 1 each time.

Abbreviation is exactly what it says, a shortening of the weapon systems name. This name isn’t just for fluff sake, but is used for purchasing upgrades such as the Anti-Aircraft trait, or certain duelist skills.

React Weapons can be used by units to perform the Retaliate reaction. With Heavy Gears these will be the hand held weapons, for tanks it will be those mounted on faster turrets. These weapon profiles are indicated with a “ >>” before the code.

Turret weapons are also indicated here with a “(T).” Turrets do not necessarily offer the ability to react, just a 360 degree field of fire. If a weapon does not have a note explaining what its field of fire is, it can only shoot in the front arc (the front of the model). Some weapons on especially large models have a left or right arc, which behaves similarly to the front arc. You can never shoot the same target with a Left arc weapon and a Right arc weapon in the same turn.

Some weapons will have a “+” symbol after an added trait. This is to represent exactly that, a trait that was added!

This is a measure of the weapons range, in inches. It is presented in two parts: Optimal Range, and Total Effective Range. The first number is the weapons Optimal Range and is given as, well, a “range” of numbers (in this case 6-18). Any shot within that range will not take a penalty to the Gunnery Roll.

Anything outside (longer and shorter) the Optimal range imposes a -1d6. The second number, the one after the “ / ” is the weapon’s total effective range. This is the maximum distance the weapon can be used to attack from. Shots beyond this automatically fail. As a general rule, weapons with Optimal ranges of 1-9 are short ranged, 6-18 are about average, and 12-36 or greater are long ranged.

Weapons with a range of “Radius X” are meant to represent an area of effect attack within a X” radius around the model. Our Jager here can unleash a cloud of grenades from its Light Anti-Personnel Grenade Launcher (LAPGL) to deter enemy infantry from closing with it.

Abbreviated as DMG this represents how deadly the weapon is. This number will be compared to the Armor of the target to see how many points of damage we inflict with a successful hit. For memorizing these, think of the Light version of the weapon as the base line. Medium adds one point to that. Heavy adds two. So a LAC is DAM 6, a MAC is DAM 7, and HAC 8.

As a general rule, DMG 4-5 is weak, DMG 6-8 is average and DMG 9-11 is strong. Remember that the actual damage your target suffers is calculated as follows:

Just like troops, weapons can have traits as well. These give the weapon special abilities or modify how it functions when you make an attack. The full section on weapon Traits can be found on page 145 of the basic rules, but below is an example of some of the more common ones. Note that sometimes a weapon will have a different range or damage than standard for it’s class. In this very rare case, it will also be listed in the Traits section.

In the Traits section of some weapons you may notice certain traits are listed with a slash as in “ / ” between them. For example “AP: 2/3/4” on the Bazooka. This means that the different Classes of the weapon (L,M, and H) have different levels of the trait. Finally some weapons offer a choice of ammunition listed as “OR:” in the entry. For example the Frag Cannon has “OR: AP:1, OR: Frag (AI)” This means that you will choose between one of these lists of traits each time you use the weapon.

This is the firing modes available to the weapon. They are D (Direct meaning you will need line of fire or sensor lock), I (Indirect, meaning no line of fire is needed if you have sensor lock or a FO to help you), M (Melee, meaning only base to base), or P (Proximity, which means the attack is measured from the vehicles base and explodes out from it). You can choose the best firing mode available when making an attack, but this section gives you an idea of the weapons capabilities.

In general, firing Direct gives you the highest number of dice, the exception being when you have support from Recon elements of your force providing targeting data via Forward Observation and Target Designation.