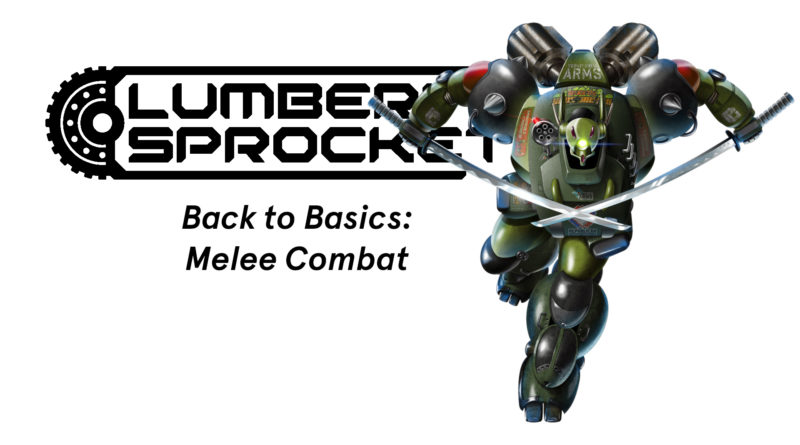 You have a 4 meter tall Heavy Gear. It’s already got guns, rockets, and tank-tread roller blades. How can it get cooler? Melee weapons, that’s how. Heavy Gear Blitz is mainly a game of ranged combat, but close combat forms a niche mechanic that can be very deadly if used correctly. Today we will talk about how to get the most out of your robot jocks.

Melee attacks are handled just like shooting attacks except that the model’s PI skill is used instead of it’s GU. Additionally, while ranged weapons can only be used once per turn, melee weapons can attack as many times as you have actions. However, there is also no “engaged” mechanic found in many other games. So models are not forced to stay locked in base-to-base. They can leave during their movement. This also means that there is nothing stopping someone from shooting you out of melee either but you CAN use your enemy as cover from other attackers.

To make a melee attack you need a melee weapon. These weapons have the same profile as the ranged weapons, but instead of Range have Reach. If your reach is zero, you can only make melee attacks in base-to-base contact with your target. If a model doesn’t have a melee weapon at all, it is “helpless” and grants a -1d6 to the defender against melee attacks. This almost always applies to vehicles and when combined with the +2d6 bonus for flanking them, it makes tanks a prime target for a melee attacker. Finally, melee weapons often have traits just like ranged weapons with AP, Precise, and Demo being the most common. Finally, most – but not all – have retaliate.

We should also touch on Brawl here. This trait can can be found both on units and on their weapons. When Brawl is on a model profile such as the Iguana’s Brawl -1 or the Cobra’s Brawl +1, it represents how capable at melee a model is. It grants a penalty or bonus to melee attacks OR defending against melee attacks. When Brawl is on a weapon then it only applies to attacks made with that weapon.

Look For An Opening

So from all of this we can determine that we want a model with high Brawl, a large damage or AP weapon, and to hit a target in the flank, ideally a vehicle or a light gear (remember, if it has -1 brawl that applies to it’s defense rolls as well.) Melee is also a good option if you are going against an opponent with few short range weapons. Getting in close to a long range unit will degrade their ability to harm you while letting you get off melee attacks. Finally, the usual defense penalties from braced, crippled, immobilized, or haywire all apply so look for weak models to beat up on.

The penalties to attack from ECM defense and from Smoke do not apply to a defending unit either! If you’ve been having trouble dealing with that pesky combat group scooting around under their ECM umbrella, go say hi and apply your favorite melee weapon.

There are three main melee weapons in heavy gear. Note Shaped charges are also used in melee, but they have less variety. The three types are Vibro Blades which bring small amounts of AP and may have precise or reach. Next are Combat Weapons which cover everything from fighting staffs to industrial equipment and usually have higher damage and sometimes Demo. Finally there is the deadly Spike Gun a high speed piton driver also used as a weapon and often found on paratroopers. The spike gun has damage generally one less than a Vibro Blade but with higher AP and no reach. As a note: Dream Pod 9 makes Duelist Weapons pack for Heavy Gear Arena to upgrade your heavy gears with allowing you to make some cool melee models.

Combat Weapons generally work for beating up light gears or lightly-armored vehicles, but you’ll need to upgrade to a Medium Vibroblade to scratch the paint on higher-AR targets. The Spike Gun is great if you can stack Brawl or Flank bonuses, because of its High AP. You generally won’t

Gearing Up for CQC

When making a melee gear you will find that most factions have at least a few profiles that come with special melee weapons and/or extra Brawl trait. Don’t forget you will be attacking with PI though. While that Spitting Cobra might give you a +1d6, if you are at 5+ or worse piloting it won’t be worth putting a bunch of points into giving it several dice.

There are a few ways to improve your melee skills beyond what’s on a unit profile. The first way is through veteran upgrades. For free, vets can swap any of the three main melee weapons for any other of the same class (for example, if you have a light vibro blade you can instead get a light spike gun). You lose any special rules that came with the old weapon, but it’s still pretty useful. Veterans can also buy an upgrade to add 1 or 2 points to their brawl.

Another way to get a melee monster is with Duelists. One model per army can be a duelist, and gains access to buy several skills that can make them better in melee ranging from improving their reach with “Lunge” to dual wielding (for +1d6 from linked), to advanced control systems to give them more attacks. Because they are veterans as well, Duelists can also add to their power with the veteran upgrades mentioned above.

If you’re relying on melee to take down highly armored targets like big AR11 tanks and such, having multiple actions is critical. You won’t crack the armor without AP, and your AP will cap out at 3-4 for MVB/MSG weapons, so you’ll need to hit the tank a few times to bring it down.

There are a few orders that can help a melee focused squad or unit. Charge gets rid of the top speed penalty for melee attacks letting you rush from cover to get the best targets. Try Again and Coordinated Attack can be used to retry a bad attack roll. Commander rerolls are also helpful on the defense while you are closing in on your target.

So hopefully this has made you consider how you could get the most out of melee. Not all factions have equal access to high quality melee combat profiles, but all of them can build one with a few skill points investment. Especially in the Heavy Gear Tournament System Missions – which can encourage close range conflict – bringing along a melee monster might prove a good investment and another tool in your box.