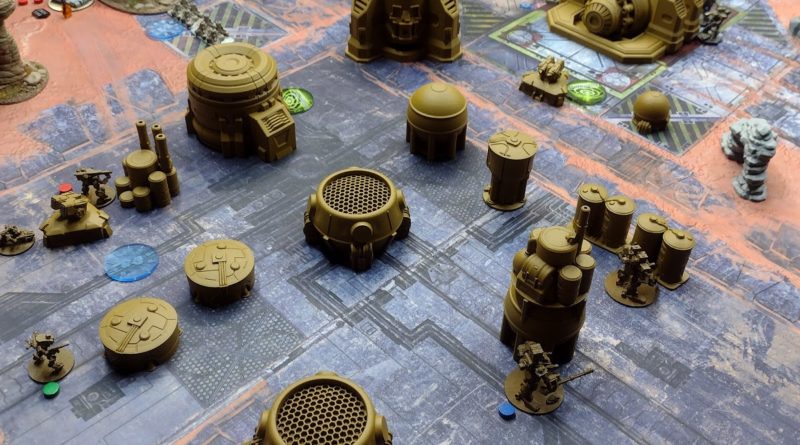 Battle Report by Than Beach-Hart

We had a limited timeframe for a 150 TV game of Blitz so decided to only play 3 turns rather than the standard 4. This also meant that we skipped pictures past turn one. Adam and I both play the North (among other factions) and wanted to see what a game using two different sublists would look like. Adam rolled out a swarm of gears with a WFP force, while I went for electronic superiority and elite units. As you will see they ended up playing quite differently despite being from the same army list.

I had to deploy first and opted to lead with my chin, setting out the Command Mammoth task force leader in the center of the table, and his Fire Support buddy Arrow Jags on each flank behind cover. My anti-fast recon gear squad with the Flash Jags went on the left flank amid the building heavy area I expected the Lynxes to move through. Infantry were placed with them (which turned out to be a terrible mistake). The right flank being empty but also having a lovely road all the way across it, I opted to set up most of my Recon squad over there to try and exploit my speed for Break the Line.

Adam deployed pretty well to counter me with each placement. His Lynxes and stripped down hunters went in the built up area. He placed a Klemm in a good position to target my Mammoth, and held back hunters and Sec Com Jaguar leaders to prevent Detailed Scan, and counter my Recon group. Finally his assault team of Bears were deployed along my left flank which proved very effective as an assault vector.

Our scenario was Superiority which has four quadrants and four objectives in addition to the standard objectives. At the end of the game you score two points for having more quadrants and a further two points for controlling the central Control Objectives in each quadrant. Both Adam and I opted for Break the Line for our first objective. For his next two Adam took Hold twice for a total of four more objectives on the table. Realizing I could not easily compete in a numbers game I opted for Detailed Scan and Wipe them Out. Since Adam didn’t have a FS squad, I knew I would be shorting myself a point, but his Lynx heavy combat group seemed like an easy kill, so I went for it.

I won the roll off and went first with my Recon squad. Launching a Flackcat way into enemy territory, I got lucky on some reaction fire and left a problem for Adam to solve. The rest of the team poked at the hunters and put up ECM defense for my forces.

Adam moved up with his Lynxes and Stripped Down hunters both to get them safe and put some pressure on me. I opted for my Flash Jaguars next and burned down two of the Lynxes right off the bat. The CGL in a Weasel also Target Designated Adams Klem and I pegged it with two missiles crippling it before it even had a chance to go(!) Adam followed up with a pair of counter attacks driving the Bears up my left flank and obliterating my infantry. He killed one squad outright and crippled two others as well as putting some damage on the Jaguars.

On the right flank he had to pull out all the stops to kill the Flackcat, but two hunters and two Jags managed to get it done. This would preview Adam’s dice for the whole night. He had a hard time hitting much of anything. Without a good target, the Mammoth decided to move up midfield and bully people, firing artillery rockets in the distance and surprisingly doing some damage with only one dice. Loss of TV was about even this turn.

The Bear Squad put enormous pressure on my left flank and their accompanying Cheetah pushed up for a Break the Line. While they had a hard time killing anything, the bears put out enough damage to make themselves a clear danger, damaging all three of my Jaguars on that flank. I got very lucky in dodging a few bazookas from stripped down hunters. Expecting to lose a lot of things soon, I instead focused on the objectives and tried to take out more of my Wipe Them Out targets, only succeeding in removing one. I floored it down the road with my Recon squad to get my own Break the Line, counting on ECM and re-rolls to hold them through.

Meanwhile the Mammoth continued up the center, bullying everything with it’s artillery rockets and keeping any gears from sticking their heads out. In this case the threat of auto and react was greater than the actual results. Remember that cheetah that Adam moved up into my DZ earlier in the turn? Well he managed to sneak into an annoyingly good spot in my flank where no one could react to it, and I couldn’t get a shot from any gear without Top Speeding in and having too few dice to kill it. I spent several rerolls trying to take it out with some low odds attacks from infantry and a ferret and though I crippled it, I couldn’t kill it. The turn ended with both of us scoring a line break.

Normally we would be able to duke it out a little longer, but we had agreed to end on turn three. And suddenly Adam was in a tight spot. He had four gears in position to potentially stop my Recon squad from scoring Break the Line again. However, two of them were Detailed Scan targets. Bringing anything else in would mean having to go through the mammoth and ceding his own objectives on the left flank. He would have to rely on two Jaguars and two Hunters to remove the Recon Squad. In the end though, even after cutting down my ECM Defense with a lucky hack, he couldn’t stop the Ferret Sniper and Weasel Tattle Tale. My luck failed on the Detailed Scans though and I only succeeded on one of two despite the high quality electronics. Committing all the shots also meant he couldn’t move out to my far quadrant, allowing me to score it with a single Jaguar.

On the left flank the Command Mammoth obliterated the crippled Cheetah and a stripped down hunter before trundling into position on an objective. One of my Flash Jaguars managed to remove the last model needed to score “Wipe them out,” and though the bears were left unchallenged to Break the Line, all they could remove was my remaining light or damaged gears in the area. The WFP superiority of numbers suddenly no longer mattered, because scoring the objective or clearing any quadrant meant going through the Command Mammoth. They made a good effort of it, but couldn’t seal the deal (again, in no small part to bad dice). As the Round came to a close I was looking at holding three of four quadrants, and the majority of central objectives as well.

It really is remarkable how different our forces played despite being from the same core army. Adam’s speed and light throw away models meant for a lot of target saturation. I went for quality over quantity and in the end was able to leverage it. Initially, I had been skeptical that the Command Mammoth was worth its cost. In particular, I find snub cannon models can spend the whole game trying to get into range. However the new Sledgehammer upgrade really fixes a lot of that and now has me considering even using the Assault Mammoth. Hucking a few artillery rockets into secondary targets while lodging itself into a low LoS area could be really deadly. I also gained some respect for the Sec-Com Jaguar which did a lot to ruin all my TD attempts or hack my ECM Defenses down.

The scenario though, presented some heavy mental lifting. Between Adams 4 objectives and the 4 already placed, there were a lot of tokens on the table. Ironically, this probably helped me because I figured I was going to lose track of objectives anyway, so just laser focused on the ones I knew I could control getting like Wipe them out and Break the Line. It will be interesting to see if future versions of this scenario keep the full number of objectives. It does present a cool feeling like you are looking at a “tactical overlay” from a command room and weighing the value of different areas, but that can become noisy with the selected objectives. One thing the scenario did very well was forced us into a tactically interesting deployment. Normally I think we would have done a double denied flank, and left the more open sections of the table largely unpopulated. With objectives to score in them though, we were forced to contest it, and the almost seperate game between my recond squad and Adam’s commanders and Hunter escort was a really fun and cinematic battle.

Obviously our self imposed shorter game did effect the outcome. If we had one more turn things might have swung. Would the WFP be able to break the Mammoth and then crush my side of the table? Or would I be able to leverage my units in the backfield and the Mammoth’s close range superiority to collapse their flank and invade more of the board? Certainly there were still points left on the table for me with another detailed scan, but Adam might have been able to capture more objectives. On my weak flank by putting his commanders at risk on turn four. Heavy Gear Blitz does a great job of capturing the attrition style of play iconic to mech games but still allows you to remove models in one go with the right conditions. Things were satisfyingly pitched enough that it left me wanting a rematch.