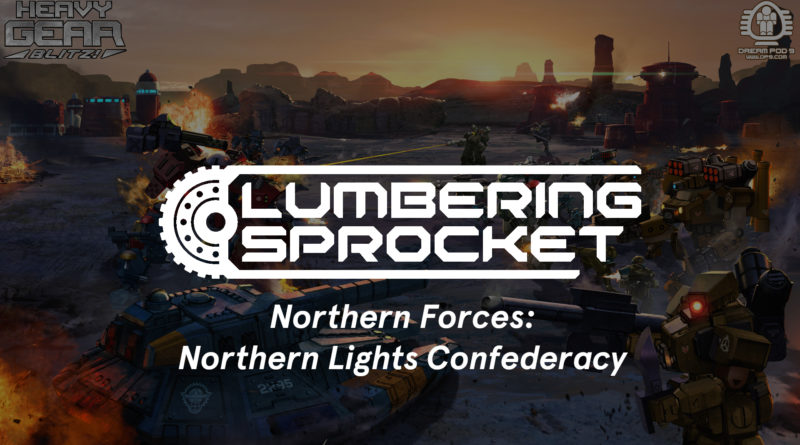 As part of a regular series, I’ll be talking about the sub lists in each faction. As a standard caveat, I’m only some dude who doesn’t play sub-list of every faction. But these articles should serve as a jumping off point for players interested in knowing more.

The NLC in the story of Heavy Gear:

The Northern Lights Confederacy (NLC) is the largest league within the CNCS. A long time military and economic stability as well as the much larger size has always given them the upper hand in jockeying among the leagues. It is also the most socially conservative of the three CNCS leagues and strongly integrates it’s Revisionist faith within its politics. While technically citizens don’t need to be members of the church, those that are not face heavy discrimination. It’s far from a religious dictatorship but the church maintains a lot of control over political life, and was a key player in pushing the CNCS into the last inter-polar war. The Revisionist faith, though, also serves to support and strengthen northern citizens and many consider it a critical part of their lives. This includes martial religious practices which provide for stronger morale and a unique close quarters fighting style.

NLC soldiers are known for their strong religious convictions which helps to motivate them on the field. Their morale is hard to shake and they tend to maintain good order on the field. While Morale isn’t directly represented in Heavy Gear Blitz, the NLC Chaplains (see below) are a good representation of this, inspiring those around them to greater heights of skill. The NLC also contains a few regiments famous for their focus on close quarter combat. Making use of the staff (a weapon associated with their divine prophet) they are not afraid to get close to the enemy. The full force, long reach style is an interesting contrast to their southern counterparts rapier dueling. Another aspect of NLC doctrine is heavy deployment of Cheetahs, one of the most min-maxed gears in the game. This high speed, advanced electronics recon gear is used not just as a scout or EW specialist, but also as an assault piece.

Select Any Role for Cheetahs

In practice this means for most Cheetahs access to SF, GP, and SK units. Given the new objective system this offers a lot of interesting options. Often you will want to take a GP or SK unit to have access to Break the Line, Capture, and Hold objectives. Being able to slot a cheetah there allows access to many recon gear perks without the full “tax” of a recon unit. Additionally, some of the more strike oriented Cheetahs can be a nice addition to a SK squad or any group that intends to go deep into enemy lines.

One Gear or Strider can be designated a Chaplain for 2 TV. It gains the usual Vet perks (or plus 1 SP if already a Vet) and can hand out SP to a friendly within 6” similar to a command point.

This allows you to have a very cool option for conversion and also give your troops some support for a low cost. It’s often worth considering making a model with Vet your Chaplain to exploit the bonus SP. Note the Chaplain can also use the Warrior Monks trait below. There are two options that spring directly to mind for the Chaplain. The first is adding them to a squad that you intend to do a lot of work to assure the re-rolls get used. The second is placing them in a highly mobile gear with ECM and moving them around the field to where they are needed using their Action to provide ECM defense and SP to keep your soldiers safe.

Commanders and Vets with Hands can purchase Fighting Staffs for 1 TV. This gives them special MVB that has Reach, 2, React, and adds 1 point of Brawl)

In addition to the conversion prospects, this trait allows you to make a close assault force in the North. Remember that your Brawl is only as good as your PI stat so while it might seem tempting to kit out Grizzly or Command Mammoth, you will quickly hit diminishing returns. Some good platforms for Warrior Monks include the Nemesis Jaguar and Hunter XMG melee specialists gears. If you can get close to a squad with long range weapons, you can really prove a pain to remove. Also keep in mind the Vet trait “in your face” can be combined with this for even more dice and a Chaplain can assure you don’t flub the roll. A final note, while clearly not the intent of this trait, it does give you another Brawl dice to use with the AP trait of spike guns found on paratrooper profiles, making it easier to trigger that AP damage.

Each CG can have up to two gears with “Climber” in any role.

A staple of the Northern sub-lists, with the combination of the Cheetah this can get really interesting. For example, you could bring a GP squad consisting of two Lion variants and two Cheetah variants giving you deadly shooters and effective ECM and FO platforms. Warrior Monk Leopards as a Recon choice are also an interesting choice being able to make the most of the Brawl bonus with their high AP melee weapons.

The NLC on the Table

On the battlefield the NLC will have no shortage of fast moving ECM and strike options. The inclusion of a veteran squad kitted for melee will be a threat at close range. That same squad is great at accomplishing Break the Line and Capture objectives, both by being in the right place already, and by being able to rely on their SP for defense. Make these Warrior Monks gears with shields and you can maximize their survivability. The force offers a lot of options for cool conversions even if you don’t go deep into making an assault squad and instead just personalize a gear or strider for the chaplain. While all Northern forces make heavy use of veterans, the NLC certainly will bring the flashiest ones to the table and make for some of the coolest moments to your games.