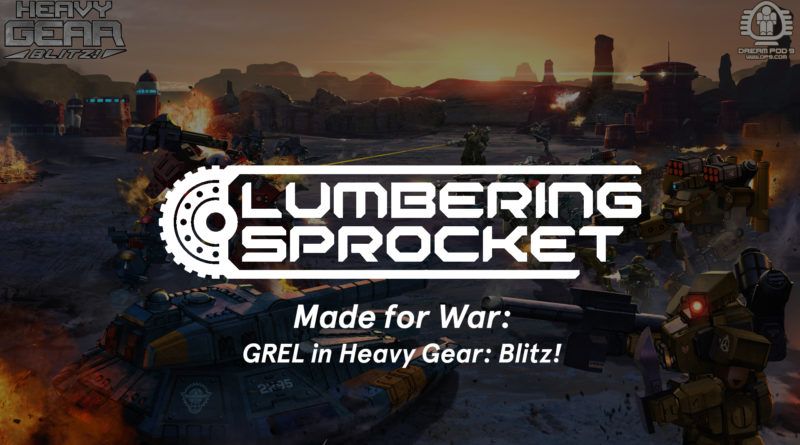 One of the signature elements of Heavy Gear – in addition to the gears themselves – are the Earth government’s super soldiers the GREL. The genetically engineered super soldiers are found on the battlefield as elite infantry units or upgrades to the vehicles of CEF forces or the Port Arthur Corps. They can be nasty to deal with if you don’t have the right tools bringing all the advantages of infantry with the resilience of a light vehicle. Still, they are not invincible. Let’s discuss how to use them, and how to beat them.

GREL in the story of Heavy Gear

Genetically Recombined Experimental Legionaries (GREL) are grown in labs and given hypno-training to teach them basic skills, train them for combat, and assure their total loyalty to the CEF. They emerge after a few short years fully grown and ready for the front lines. While not as competent as a veteran soldier, GREL have physiques custom designed for combat pushing the envelope of human possibility. They are designated by Class (such as the Mordred Shock Troopers, or Jan Commanders) and designed to have the perfect bodies for their roles. Earth uses them as cannon fodder, officially classifying them as equipment. GREL are also purple.

GREL are effective on the battlefield not just because of their physiques and equipment, but their unshakable loyalty. Yet, they are inexperienced and see every mission as critical. During the War of the Alliance Terra Novan forces were able to use the GREL’s strengths against them, baiting them into unnecessary last stands and confounding them with hit and run tactics. Since the war, GREL abandoned on Terra Nova have begun to learn and adapt in ways never expected. This has happened with the older units as well, and the CEF fears losing control of it’s super soldiers. The CEF has even been “Decommissioning” older GREL locking them away, killing them, or secretly wiring their brains into FLAIL units. If you are getting Blade Runner vibes you are on the right track. This makes GREL one of the more interesting moral themes in the story line.

Using GREL on the Battlefield

There are two ways to use GREL, as an upgrade called FLAIL crew, or as infantry units. As an upgrade CEF vehicles can be crewed by FLAILs (GREL brains wired into the vehicle). This gives the unit the ANN (Advanced Neuro-Network) trait which allowed for a lot of flexibility. When activating an ANN unit, they choose one of their skills (GN, PI, or EW) to add +1 to for their activation. This can give you better odds on hitting, getting off that FO roll, or dodging reaction fire. As infantry GREL come with most of the usual infantry options but essentially better. Take a look at the comparison below.

Two armor and one point difference of Hull might seem small, but consider what people need to do to remove you: the common LAPGL would need a MoS of 4 to cripple a GREL squad and 6(!) to kill it outright. Compare that to needing a MoS of 1 to cripple standard infantry and 4 to kill them outright and you can see how durable GREL can be. This in addition to heavy anti infantry weapons mean GREL squads are ideal for holding objectives or forcing out or eliminating enemy foot troopers. Give them Panzerfausts or Hand Grenades and they can damage vehicles as well. The CEF tends towards more expensive units like hover tanks, making the GREL a good way to build out a little more size. A unit of four GREL Squads (of different variants) can be a reliable GP choice to let you focus on bringing deadly hovertanks to bear.

In addition to the standard line up of infantry squads GREL also have a few specialty forces. The FLAIL units have even heavier weapons and greater speed, essentially representing small Heavy Gears. Morgana units have stealth and bring melee skill or sniper rifles to bareear. With the bonus Brawler from Morgana they can also make good use of Shaped Explosives. Finally, GREL hoverbike squads lose a bit of GU and AR but have a blistering speed of 12” which makes them great for mobility strategies or running in to capture or hold objectives late game. With the standard upgrades (drones, smoke, explosives) you can make some expensive but terrifying combinations.

OK, you’ve heard they are terrible. Now how do you deal with them? Well the first way is weapons. Knowing you are playing against Port Arthur or the CEF and it’s allies it is often worth considering at least one or two specialty anti infantry pieces such as the Diamond Back for the south or models with HMGs. These will help even the odds against infantry. The second is to focus fire. Sometimes you might just have to shoot a GREL squad over several turns or even use weapons intended for taking out gears. It’s frustrating to be limited to 2 damage maximum with your light autocannon, but three units scoring hits on a GREL squad will take it out. Be sure to keep the opponent’s objectives in mind if the GREL can’t score them, you might have to ignore them. Just be sure you don’t let a deadly unit sneak up.

A special case is GREL swarms and high mobility GREL. Certain sub lists such as the CEFIF will bring huge amounts of GREL or GREL infantry assigned to ANY role. As with any skew list this sort of thing is hard to prepare for. The best advice I can offer is to focus on the objectives (both yours and the enemy’s) and try not to play their game. As for high speed GREL such as hoverbikes, or GREL in APCs its best to spend a few minutes thinking about how they will be used in the game. Is it a GP unit and the enemy has Capture objectives? Do they have shaped explosives and intend to go hunting? Knowing where they will be heading can help you curtail the enemy mobility advantage.

GREL offer an interesting factor to the game both in terms of their storyline and on the battlefield. They can seem indestructible when you first encounter them. They are very reliable infantry and a great addition to any force. But a prepared opponent will find them far from invincible.