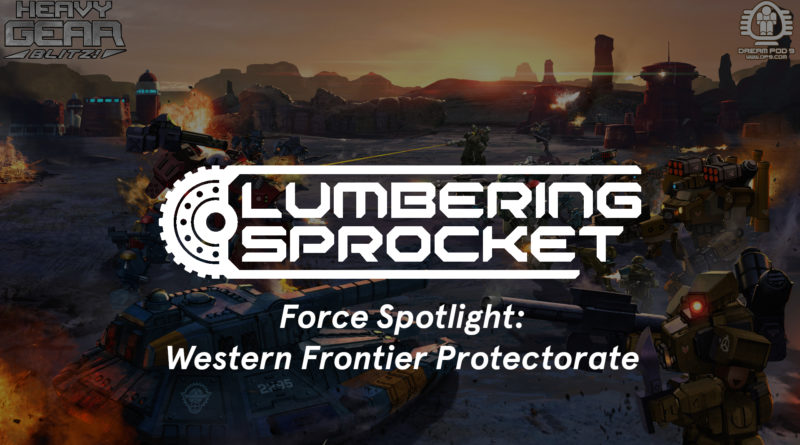 The perennial underdogs bring guts, glory, and a swarm of veterans to the table.

Sub-List Overview is a recurring series focusing on one specific army in Heavy Gear Blitz! As a caveat I don’t play every army. These articles are to give new players a broad idea of how things function.

The WFP in the Story of Heavy Gear

The Smallest of the Northern leagues, the Western Frontier Protectorate is a constant underdog having been on the losing end of many conflicts in the past. The league itself is mostly rural, and only contains three city-states each of which is a heavily defended fortress. Unlike the UMF or NLC, the Protectorate has few natural barriers to blunt an invasion from the south. This, and the constant worry of Rovers (desert bandits) means that even the far flung homesteads of the WFP tend to be somewhat militarized.

The League further reflects the importance of its defense by granting full citizenship and the right to vote only to those that serve in the military. The people of the WFP put more importance on family than anywhere else in Tera Nova, and a person’s surname appears before their given name in the WFP. With little political power, the armies of the Protectorate are often given cast off gear or forced to make out-dated equipment work long past obsolescence. This means that they favor those machines that are easily maintained and repaired, and that their pilots train longer with them to get the most out of their tried-and-true weapon systems.

The WFP makes use of lighter forces with larger numbers out of necessity. They may be smaller than the other northern leagues, but per-capita have a larger military. An ethic of family and personal responsibility – along with not uncommon blood feuds – and the constant threat of foreign invasion keeps their soldiers sharp. Their pilots also have more training with their machines than the other leagues. They may not have the best technical or strategic skills, but in terms of raw experience and “flight hours” they are hard to beat. This translates into a force of light, accurate, gears with expert pilots.

Veteran Leaders – Any Commander in the force may purchase the Vet trait for 2 TV without counting against veteran limitations.

Remember that any commander – including your free combat group leaders – that gets a skill point has that SP automatically upgraded to a Command Point instead. This allows the WFP to have more CP and thus more orders than the average force to help them stay safe or do extra damage.

Dragoon Squads – One PU may be composed of any Hunter (all variants including the XMG), Jaguar, Cheetah, Razorback, and Rabid Grizzly gears. Regardless of what models used, this PU counts as “SK” and all models in the unit can be Veterans without counting towards the veteran limit.

This one is a bit much to parse, especially since most of the above gears already have the SK option in their UA. It does allow you to put some of the longer range hunters such as the Pathfinder and Arrow and the advanced White Cat into SK squads which is normally not allowed. This could make for an interesting long ranged group with “Ol’ Trusty” below. Secondly, Dragoon Squads opens up even more veteran slots without needing to use the Elite Force rule.

Ol’ Trusty – Any Hunter (but not XMGs), Stripped-Down Hunter, Ferret, Weasel, Wildcat, or Bobcat may improve it’s gunnery but +1 for 1 TV (max of once per gear).

While most of these gears are far from the scariest things on the battlefield, there are still some nice candidates. The Hunter UC with it’s +2d6 from Frag will maximize the value of the skill increase. This same logic applies to the pack gun armed scout gears. A Flackcat also stands out when used in it’s Anti-Air role. Also, the stripped down hunter variants with heavy weapons such as the Destroyer are fast enough they might be able to get into a better firing position for more dice to make use of that skill bump.

Tested in Battle – One gear or strider per combat group can be upgraded to a veteran without counting against the usual veteran limits.

More vets. See a trend here? This does allow you to put veteran upgrades in some interesting places, like being able to have field armor or resistances on your strider. Or you might increase the melee skill of a model in a combat group to bring a melee specialist along with them. You can combine Vet upgrades with Ol’ Trusty above to make some very high Gunnery skill Hunters for fairly affordable prices.

Prospectors – two gears with the climber trait can be added to any unit regardless of UA.

This opens up all UA for wide use of leopards and lion gears as well as the Mountain Hunter. Combining UA’s with some units that can climb and some that can’t isn’t probably the best option – unless you intend to split the combat group on the table – but it still adds some extra flexibility and lets you make use of some very cool looking models.

The WFP on the Table

A WFP force is able to get a lot of the advantages of an elite force without the usual bloat of having to make every model a veteran. Their veteran commanders and buffing the gunnery on already cheap gears can favor a force with large command groups. A six strong force of GU3+ hunter variants all benefiting from command tokens can do a lot of damage. Similarly few people are expecting to get gunned down by a squad of Recon gears, but with the WFP it is a possibility. With careful use of your one per unit veteran upgrades, you can load up combat groups with specialists aimed at specific roles – electronic warfare, split fire bonuses, melee, survival – without having to buy skill points you might not otherwise use on the rest of the squad. Spend some time looking through the veteran upgrades and you will start to see there is a wide pallet to play with there. Finally, access to an additional SK veteran squad, even if the construction is a little limited, can allow you to make a good hammer unit. All these upgrades get expensive though which is why the WFP will often make large use of the cheaper models. Master the Hunter and the older model recon gears you will master this force.