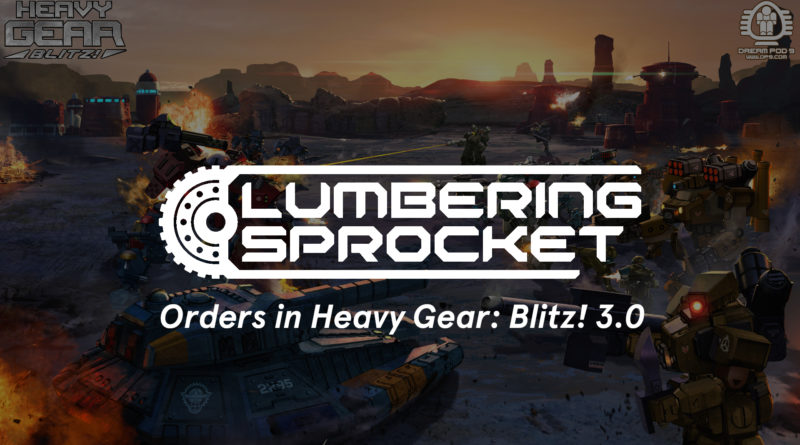 Commanders in Blitz are one of the easiest ways to boost your troops’ effectiveness. Far more than just the person who rolls initiative, your leaders can improve attack rolls, let you react out of turn, or give models critical re-rolls. They do this through the Orders mechanic. Every combat group must automatically elect one leader to be the Combat Group Leader. This CGL gains a free Command Point (CP) and any Skill Points (SP) they have or gain during a game will also become CP.

Command Points let you use Orders. We will go more into that below, but first it is worth pointing out that commanders can only issue Orders to their own combat group. However, one commander in your force MUST be upgraded to the Force Leader. The Force Leader will make initiative rolls on behalf of your troops!

Orders are not actions and don’t follow the standard turn order. This means you can use one at any time, even during another player’s action. You can also issue more than one at once! If you find yourself suddenly under heavy fire you could have your commander issue both the Defense Up and Pop Smoke orders when shots are declared. There are only three general limitations to orders:

Issuing orders in the heat of battle requires a roll! While the Electronic Warfare rules are cut and dry one can assume that there is all manner of chaff, active jamming, and just electromagnetic noise from the Terra Novan environment. Because of this, commanders will have to make an unopposed EW roll to issue orders. If you fail, the CP is spent and the order doesn’t happen. Remember if you are issuing several orders at once, it is still just one roll. We will break down what orders do in depth below, but first let’s talk about ways to make issuing them easier and how to block them.

The Comms trait allows a commander to issue orders to anyone within formation (IE within 6” of it and from the same combat group) and automatically pass the EW roll! You can also use the Comms trait of any other model in formation, so there is no need to make sure your commander’s model has this trait so long as you keep your radio guy close.

You will still have to make an EW roll for models outside of formation, but if you do so with another models Comms, you will also use their (likely better) EW skill. Satellite Uplink is an improved form of Comms and does all the same things. However, it ALSO improve s your EW skill by 1 when you do have to make an unopposed roll. Finally ECCM will give +1d6 to any EW roll (opposed or unopposed) to all models in Formation (same CG and within 6”).

Orders can be stopped by the ECM Jamming Reaction. ECM Jamming is a Reaction by a model with ECM or ECM+ which forces an opposed EW roll, before the roll is made for the order.. Since it is opposed, the bonus to the EW skill from SatUp is not available. On a margin of success of 0 or above, i.e. the Jamming model has an MoS of >= 0, the Model is successfully Jammed and may not issue orders or declare Scan actions for the rest of the round!

If the Jamming attempt is unsuccessful, the commander issuing the order rolls as normal, and may still fail the order attempt. ECCM will grant +1d6 to a model being jammed as well as the model performing a Jamming action, so it’s a good bit of kit to have around!

Getting the most out of your commanders

While you will notice that while there are many options to upgrade your Combat Group Leaders none of them add additional command point. There are still ways to get more orders for your units though. Remember any SP on a leader becomes a CP. There are a few ways to get those Skill Points. Some vehicles (often the Command variants) will have SP listed in their profile meaning they grant a free skill point. Veteran upgrade also gives a Skill Point.

Finally, notice the Second in Command upgrade. This lets one additional model in a combat group get a CP. The above options also apply here meaning you could upgrade them to veterans or give them the right equipment and have a combat group with 4 (or more) orders. If you delve a little into the profiles in your faction you can start to unlock hidden synergies and get the most from the brass.