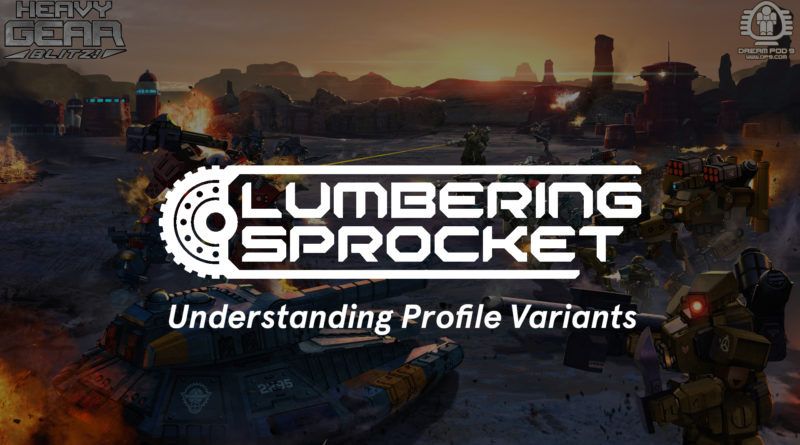 An early barrier to understanding Heavy Gear Blitz is model variants. For example the basic Northern gear the Hunter has a total of 49(!) variants of which 34 share identical stat-lines except for equipment differences. Now part of this happens because Blitz is over 25 years old and DP9 has been very careful to maintain legacy designs when at all possible. That said, why is there so much of practically the same gear? Well the real answer is that there are deeper strategies at work.

Let’s break it down to something easier to parse: we will look at four basic hunter options. (I’ve omitted the Traits section here because it is identical for these models)

At first glance they are hard to tell apart. They all have the same general purpose package of LRP, LAPGL, and LVB to give them some basic indirect, anti-infantry, and melee/anti-armor options. But a single main weapon system gives these hunters dramatically different roles on the battlefield. The Destroyer Hunter’s bazooka makes it an effective anti-tank platform at an affordable price. Meanwhile the higher damage of the Hunter Gunner over the baseline hunter means it can accompany longer ranged gears and still contribute decent shots against a variety of targets out to 36”. While the range bands are the same, the increased damage may help sneak some points of damage through on reduced dice. The Hunter UC with its frag cannon is a terror to infantry units and light vehicles of all kind if you let it get close.

While all of these hunters could damage a tank, engage at 36” range, or clear infantry, some would excel at one of those roles. Your local meta might also dictate your choices. Tables that are typically very dense might favor the short range deadliness of the Destroyer or UC while an open table with lots of woods or a large number of Utopian or Eden players (with their lighter armor units) might see the Gunner’s stock rise.

UA is also an often overlooked part of Heavy Gear Blitz! While it is possible to bring basically anything you want as a support unit, all the models in a Primary Unit have to share one UA. In the above example, the Hunter UC would be a nice cheap insurance policy for a unit of long range gears, but it only has GP and SK availability meaning it will be limited to a closer strike role. Meanwhile the basic Hunter has a GP+ allowing for unlimited deployment making it useful in swarm lists, or sub lists that limit the availability of certain units UA.

Another reason for all the small differences between profiles is player creativity and style. Heavy Gear allows for a very broad range of effective choices and army design. Combined with the deep backstory players might want to create a specific theme force or unit from the fiction. Variants make this possible. Let’s talk about two different profiles that serve the same role. To borrow an example from one of my own forces:

The UMF forces of the North have a unit tradition of using the older Tiger models (or in this case the command variant Sabertooth). I usually field a Sabertooth as a command model in units to fit this fluff. Cross comparing it to the Thunder Jaguar (which fills the same medium trooper gear role) the two are pretty similar. While the Jag gets better speed and EW as well as some very useful traits, in practice it won’t be too much more survivable than the Sabertooth. The Sabertooth also has more hull meaning it can keep ticking a little longer than the Jaguar (or about the same amount taking Agile into account). I COULD pay the 2 points extra for a clear upgrade, but the Sabertooth is not so much of a downgrade that I feel compelled to.

Essentially variants and similar models can allow you to feel confident in your forces effectiveness without having to make your list hyper optimized. The choice between battlefield effectiveness and style or creativity is much more broad than some games. It is even hard to find a “mono build” for most of the filled out factions. Also some deeper strategy or granular differences can mean it is possible to find a diamond in the rough for your particular force or terrain. Get to know your faction, learn to know the main weapon differences, and you can start to unlock cool and creative ways to play.