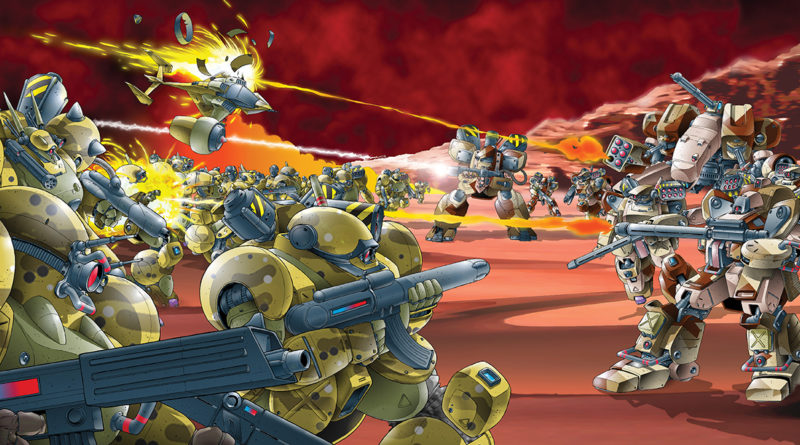 When you’re getting into any game, it’s important to get a general idea of how the various factions operate, to help you make an informed decision of what to start with. This isn’t going to be a deep dive into the individual tactics of each army, but instead this will hopefully provide a high level overview that can point you in the right direction, while you learn the individual nuances.

The first and most basic way to divide the factions in Heavy Gear is between those based on Terra Nova, the primary planet in the game setting, and those factions which represent Earth and it’s other colonies. Terra Nova factions are most well known for the Gears which the game is named for, big stompy robots.

It’s very well worth noting that North, South, can make over 100 points with their starters alone, which is the standard point size on a 4×4 table. PRDF and NuCoal come with a few more miniatures which lets them get over 150 points, which is standard for a 6×4 table.

The two most iconic factions in the game are the North and the South. The original conflict of the game centered around the Polar Wars between the two factions, duking out their rivalry across the badlands. Gameplay-wise, they have a lot of similarities, so it’s important to understand what makes them distinct. Both represent the largest, most well rounded forces in the game with a large collection of miniatures available. North favors bigger guns and heavier armor, often times up-gunning and up-armoring even smaller gears for conflict. On the other side, South has much more versatility, especially with their wider access to ECM, and support gears equipped for a variety of roles.

As far as miniatures go, both factions have HUGE ranges, and while their plastic kits are less customizable than the newer ones out of the box, this also makes them easier and quicker to build for less experienced hobbyists. With a little extra work and a sharp hobby knife, you can still make them quite dynamic. Check out the full catalogue for both factions here:

Speed, speed, and some nasty guns, built from the survivors of the first CEF Invasion and a loose collection of Badland cities they bring some (old) Earth technology to the table with hover tanks, and abandoned GRELs. NuCoal is an army which can move up the table and reposition with contemptuous ease. Even some of the heaviest mechs, like the Arbalestier, hover across the battlefield on thrusters mounted to their feet. The combination of their alacrity and powerful short ranged attacks makes them perfect for getting up close personal. Supplementing the NuCoal armies are the Sand Riders, desert nomads who ride various large reptiles, and have unique access to Corrosion weaponry.

This army enjoys the benefits of having a brand new set of miniatures fresh from Kickstarter. They’re very detailed and allow for a wide range of poses. Check ’em out here:

As a wealthy, neutral state, the PRDF has some of the most technologically advanced forces on Terra Nova. This access to high-tech gear is well represented in their unparalleled access to ECM. Even their most basic gears come with it as standard. With ECM all over the place, they can cause many enemy vehicles to go haywire, jamming enemy comms, or put up ECM defense fields to protect themselves and nearby units. The army as a whole is a bag of tricks ranging from hyper-fast Harrier gears, to the absolute slab of armor that is the Argos. While it may sound like they have it all, the PRDF lacks dedicated heavy armored vehicles, instead relying on their specialized support gears to do the heavy fighting.

Like NuCoal, PRDF has a brand new line of plastic miniatures from their Kickstarter campaign. Both armies will want to add on some extra pewter miniatures as your collections grow.

A collector’s army first and foremost, Leagueless represents the minor factions, tribes, and warbands who live in the Badlands, a massive arid desert that circumnavigates Terra Nova around its equator. For army construction they draw their forces from North, South, NuCoal, and Peace River. They lack access to the heaviest equipment of any of the factions they draw from, but they also have unique gear modifications and skills to help them survive the Badlands.

With ample room for conversions, modifications, and kit-bashing, this is a fantastic army for hobbyists. They have no miniatures of their own, but you can modify just about anything to serve the needs of your roving Badland bandits.

Elite, loaded for bear, hardened veterans, the Black Talons are the best of the best on Terra Nova. Assembled from veteran pilots gathered from all the Terra Nova factions, these fighters are able to take the fight to the CEF even off planet! With equipment and weaponry matched by no other force on the planet, their forces are small in number and incredibly efficient.

As a new player however, they are probably the most difficult entry point into Heavy Gear. A small mistake can spell the doom of one of your gears and cost you the game. Heavy Gear is a game of attrition, and they can afford little to no redundancy on the table. Furthermore, while their miniatures are gorgeous, they are entirely pewter, making them more expensive to get started with, and more difficult for a new player to assemble than the plastic kits of North/South/PRDF/NuCoal. If you want the finest of miniatures, have a look here:

Earth and her Subjugated Colonies

Every good space opera needs some sort of outside force to drive the plot. Well, Earth is exactly that! After abandoning Terra Nova and the other the colony worlds hundreds of years ago, Earth has returned to claim what is theirs (so they say). With them, they have also brought technology developed on other colonies to better subjugate the planet.

While the various factions on Terra Nova fight wars for one reason or another, Earth represents their single biggest threat. Instead of building armies centered around gears, CEF has developed hover tanks, which combine speed, durability, and firepower into a compact and deadly package.

After their first failed invasion, CEF has also developed Battle Frames, similar to gears, though more advanced and typically built for a specific battlefield purpose. If that wasn’t enough, their infantry are the GREL, genetically engineered super-human soldiers, more heavily armed, armored, and well-trained than the infantry of other Terra Nova forces. Join the CEF and help bring Earth’s wayward colonies back into the fold!

If humanoid robots and tanks are not your thing, but you like the idea of terrifying spider-tanks, then Caprice is for you. Their high-gravity home world makes typical gears obsolete. Instead they have many-legged striders equipped with climbing spikes to move around the battlefield.

These multi-legged vehicles also provide additional benefits. They’re far more stable firing platforms, helping them dish out solid firepower. They have increased ability to react to enemy actions and carry more armor and support systems increasing their survivability. This is a very offensive force, advancing steadily up to control the table. And those climbing spikes that are designed to hammer their way through solid rock to achieve a foothold? They serve a second purpose as deadly melee weapons, puncturing through an enemy Gear’s armor with ease! Spider your way to victory!

Utopia is probably the most unique army in the game. Living primarily underground has resulted in Utopia abandoning most large vehicles, in favor for highly advanced armigers (gear-like combat suits) and their drone weapon systems. Their armies mix swarms of automatons with highly effective commanders to lead them.

Despite not having much in the way of large combat units of their own (they do have one, the MAR-DK), their alliance with CEF has resulted in them being furnished with the mighty Gilgamesh Command Tank, the single largest miniature in the entire game, which can be as many points as entire armies of other factions.

A feudal backwater world where war is prime time entertainment. At this point the faction hasn’t been fleshed out and only has a few, small units to use. Once this army receives more attention we’ll be sure to cover it, but as it stands, definitely don’t start here.

Hopefully this gives you a place to start when you’re contemplating which army is best for you. Obviously playing whatever you think looks best is a great approach as well, and just because I describe an army one way here doesn’t mean it doesn’t have a variety of play-styles available. You can play North as a much more subtle army, and you can play a small model count Utopian army. There is a lot of room in any of the factions to explore different ways to fight.

Thanks to Than for his help on this article!